Hey, has anyone seen or spoken to Robert Byrd (D-Klan) lately? 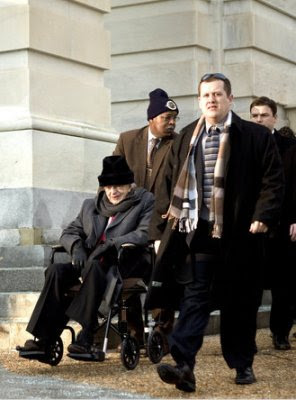 With a 59-41 advantage in the U.S. Senate, Democrats continue to push an aggressive agenda before the November midterm elections. There is even talk that a defeated, lame-duck Congress would pass wildly unpopular legislative packages like Cap-n-Trade and Amnesty for Illegal Aliens.

So with massive bills hanging on a single vote in the Senate -- 60 votes are needed to break a filibuster -- one man seems to have curiously disappeared from sight.

That would be Robert ("The Kleagle") Byrd, Democrat of West Virginia, a one-time Ku Klux Klan chieftain and leader of the Democrat anti-Civil Rights movement in the sixties (along with Al Gore's poppa). Byrd's 92 years old -- with more than 50 years in the Senate -- and has suffered from a variety of ailments over the last decade.

• Hospitalized for six weeks after a May 2009 infection.

• Hospitalized after a September 2009 fall and infection.

• Has suffered from a debilitating form of Parkinson's Disease for years.

• Had to be wheeled repeatedly onto the Senate floor in December for a series of health care votes and gave a "thumbs up" for aye votes or "thumbs down" for nays.

In his rare appearances, Byrd appears extremely frail and able to only haltingly read a few prepared statements.

The key questions for West Virginians in particular -- and Americans in general:

• Is Byrd physically able to perform his duties as both a Senator and President Pro Tempore of the Senate?

• Is he mentally able to fulfill his responsibilities?

• Does Byrd have free will -- or is he directed to vote and speak based upon the commands of his retinue?

These would appear to be very important questions that require an independent medical assessment. Perhaps one of our beloved reporters in the legacy media -- or an enterprising young new media star like Don Surber -- could pursue these important questions.

at 9:36 AM
Email ThisBlogThis!Share to TwitterShare to FacebookShare to Pinterest
Labels: Democrats

I was told that Sen. Jeffers of VT was non compos mentis for a good while towards the end of his U.S Senate career. Consequently, his staffers were directing him to press the Yea or the Nay button during voting.
I bet Robert Byrd's staff is pressing the button for Byrd. Heck it might be 'WEEKEND At BERNIE'S"

Dead and near Dead Men Voting.

Parkinson's medications are very toxic and you have to take other medications to counteract the effects. I know because my wife takes them. Major side effects are dementia and hallucinations. She is nearly 40 years younger than Byrd and would in no way be qualified for a senate office. Somebody has to be in control of him.

He's not dead, he's just pining for the fjords.

Article One: "No Person shall be a Senator who shall not have attained to the Age of thirty Years, and been nine Years a Citizen of the United States, and who shall not, when elected, be an Inhabitant of that State for which he shall be chosen."

Hm, nothing about sanity in there....

"Each House shall be the Judge of the Elections, Returns and Qualifications of its own Members..."

Ah, now we're getting somewhere. Reading, it appears that only the Senate can remove a Senator (to the great dismay of many a recall effort, including myself), and only with the votes of 2/3 of the Senate.

That doesn't mean we can't call out "The Emperor has no clothes!", it just means we're stuck with him until next election, even if Grima Wormtoungue has to stand by his side to interpret his mumblings as Yea or Nay.