Olbermann: "It was a great speech if you were on another planet for the last 57 days."

Olbermann: "Nothing specific at all was said." 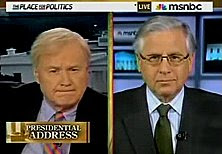 Howard Fineman: Obama should be acting like a "commander-in-chief."

Matthews: Ludicrous that he keeps saying [Secretary of Energy] Chu has a Nobel prize. "I'll barf if he does it one more time."

Matthews: "A lot of meritocracy, a lot of blue ribbon talk."

Gee, and here I thought he had all of this executive experience to fall back on.

What ever bones you have to pick with either, Sarah Palin and George W. Bush are both looking pretty damn good right now.

Indeed, GW Bush does look very good. He was a sound Center-Right CEO, who led with class, professionalism, seriousness, experience.

I am not certain why you referenced Mrs. Palin in that last line however. Perhaps it is just a jibe against the ugly Democrats, who snobbishly demeaned the likes of Palin, Bush, etc., as being unworthy of the high Office. She would indeed be far better than any Democrat of course. Mrs. Palin is a fine American.

However, I am truly, truly, truly growing tired of the HYPE. Some of her most devoted FANS, have claimed the Celebrity debased Obamacare all on her own! It is getting rather silly in the "It Is A Palin World And We Just Live In It" arena. It reminds me of the delusional fever about Fred Thompson which was utterly romantic-emotive without genuine basis.

In regards to a credible Leader, Mrs. Palin does not compare to GW, and the attempt to portray her as the next Reagan is actually a bit of an insult to the Legacy of the mighty GIPPER. I highly doubt RR would have abandoned his Oath to an Office, as Mrs. Palin did with the Alaskan Governorship. Nor, has Mrs. Palin ever managed any Crisis like GW Bush did with 9-11.

The more she is being pushed, the more it grows rather silly. Perhaps Conservatives need a Celebrity, but the Icon Building reminds myself of the 'cult of personality' which we see creating such folly from the fashion obsessed Democratic Partisans.

Gov. Brewer is busy on the JOB, fighting the against the overwhelming influx of illegal immigrants – creating enormous burdens – including growing rabid criminal activity in AZ.

Gov. Jindal is busy on the JOB, fighting the BIG SPILL, trying desperately to act while the Democrats blunder, hoping to protect his State in LA.

These are the truly positive GOP heroes who are on the JOB, in the trenches, acting like responsible CEO’s – trying to overcome the destructive effects of Democrat failure with sound policy, serious Leadership, and productive action.

Mrs. Palin is a fine spokesperson, but she actually abandoned her sworn Oath – her Office after only 2 years? Because of a mega book deal, future ambition for higher office, and a some weak Leftist lawsuits?

In the face of the other Republican Leaders who are impressive CEO’s, Mrs. Palin’s insight is less influential in many ways.

The constant hyping of Mrs. Palin is just not helping in many ways. Especially knowing the lackluster efforts as the Alaskan CEO - including populist tax increases for Oil Companies, creating Climate Panel bureaucracy, various "First Dude" emails sent as if he were Governor during her tenure, etc.

Even Mrs. Palin’s criticism regarding the push for Cap and Trade folly becomes rather weak, since she joined the Maverick’s Platform – which was pushing the same disastrous Cap and Trade TAXATION scheme earlier.

It is sometimes as if some Conservatives ignore the content of her offering as well. As recently she wrote (had someone write) advised the disasterous Obama via her Facebook Page to “talk to experts” to figure out the best way to “hold Oil Companies accountable” – YIKES.

That was embarrassing to read from Mrs. Palin – as that is what Democrats do, seeking to blame others, (threatening Private Sector Companies), failing to address the problem or CRISIS.

It is ironic, for if she had not left her responsibility in Alaska, she could be even using the State Government to fight Obamacare in the Courts. But she took the easy route to peddle her Celebrity. Even the visit with Maggie is a product of a typical politician engaged in Image Building. Real Leadership needs no props and gimicks in this manner.

Christie, Jindal, Brewer, Ryan, Boehner, etc., deserve all the acclaim, praise, highlight. They are doing the JOB, with impressive efforts.