Report: Egyptian Foreign Minister says Obama told him to be patient; he will 'show the Muslim world how [to] deal with Israel'

Victor Mordecai, writing in the May 2010 edition of Israel Today (PDF, 4MB), offers this report which, as yet, is unconfirmed by an independent source such as MEMRI. 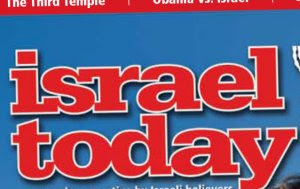 My wife Rachel, who monitors Arab language broadcasts for Israel Radio, picked up a revealing statement on the “Round Table Show” on Egypt’s Nile TV.

Egyptian Foreign Minister Ahmed Abul Gheit said he had a one-on-one meeting with Obama, who told him that he was a Muslim, the son of a Muslim father and stepson of Muslim stepfather, that his half-brothers in Kenya were Muslims, and that he was sympathetic to the Muslim agenda. He asked the Arabs to show patience.

Obama promised that once he overcame some domestic American issues (like healthcare reform), he would show the Muslim world how he would deal with Israel. 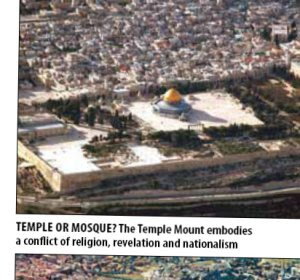 ...Pro-Arab, so-called Christian presidents are one thing. But how concerned should we be if the US President is a Muslim who is loyal to the Muslim agenda to isolate and weaken Israel? When the Palestinians talk about nothing but war with Israel and its annihilation, and the president of what was our strongest ally backs their demands for a state with Jerusalem as its capital, and adheres to the same faith, should we not be warning the American public?

In September of 2009, Obama did meet with Ahmed Aboul Gheit. This photo, provided by the State Department, depicts the pair with their spouses. 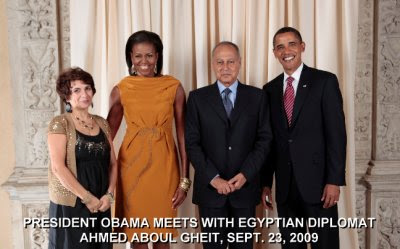 And it is well-known that Gheit is a true hard-liner when it comes to Israel. One of his recent editorials spelled out his hatred for the Jewish state:

All the Arab sides – both those who support negotiations and the ones who pin their hopes on resistance – must refrain from extending a [friendly] hand to the extremist Israeli government. What we need now is to increase Israel's isolation, to besiege it as an occupying country, and to expose its racist face and gain the world's support for our just causes. If this peaceful siege does not achieve the hoped-for results, we will discuss [what to do] when the time comes.

I repeat: though Obama and Gheit definitely met, the report of the President's statement is unconfirmed. However -- for a guy who marinated in Rev. Wright's anti-American, Hamas-supporting, and antisemitic Church for two decades -- it wouldn't come as much of a surprise to find out it's entirely accurate.


Hat tip: Pat. Linked by: Michelle Malkin and The Astute Bloggers. Thanks!

at 9:18 AM
Email ThisBlogThis!Share to TwitterShare to FacebookShare to Pinterest
Labels: Democrats, extremism, Obama, War, World

Of course this bastard is a Muslim. It's been obvious for months.

The Clown Prince bows to his Saudi master, recites the muslim call to prayer perfectly and says it's the sweetest sound heard on earth, states "my muslim faith" to Stephanapolous, supports Hamas, delivers his Cairo speech, the Farrakahan/nation of islam but there's nothing to see here.

This is an impeachable offence. The option should be prison time or a one way ticket to Kenya.
And I want the people who covered it up prosecuted.

The claimed comments are also made on Pg.3 of the same Israel Today issue by Aviel Schneider in a Politics commentary entitled Obama, a ‘Strategic Catastrophe’.

I've searched the web for corraboration, alas, I have found none excepting the circular referencing of bloggers to other bloggers and back to the original non-linked claim.

Only here is it stated up-front that this "...as yet, is unconfirmed by an independent source such as MEMRI." Too many folks online are reporting the story as fact.

Is Obama really a Muslim or just posing? See how deep his rabbit hole goes with the Historyscoper at
http://historyscoper.com/obamascope.html

Who does history award Jerusalem and environs to, the Jews or Arabs. Find out at
http://historyscoper.com/tlwjerusalem.html

Look at the SOBs treatment of Netanyahu and how he kowtows to Muslim rulers. That speaks volumes about where his loyalties lie.

@IndigoRed: appreciate the recognition of my caveat. It's too easy to simply repeat the story -- even if it seems legit -- without some sort of corroboration.

And this, ladies and gentlemen, is why Barack HUSSEIN Obama wants the FCC to control the internet.

Do you not think someone may have noticed?

Cannot believe there is such naivety.

It may or may not be rubbish.! How do you know or are you letting your sentiments and politics decide the facts?

From what I understand the Islamic concept of "taqiyya", is a religious dispensation by which Muslims may hide their beliefs.

I am NOT saying that he is a Muslim because i do NOT know he is.

In any event, it IS clear that Muslim or not, he is no friend of Israel.

I am only qualified to judge a person on their actions, not their beliefs, and so far Obama's actions are beneath contempt.

What i can't understand is why is this a surprise to anyone?

I am a Jew and I did NOT vote for him. If you did I think you need to look in the mirror.

The BNP (Black National Party) has been created to expedite the work of the Race Equality Secret Service (RESS).

The BNP (Black National Party) gets stronger as "STORMFRONT" gets weaker.