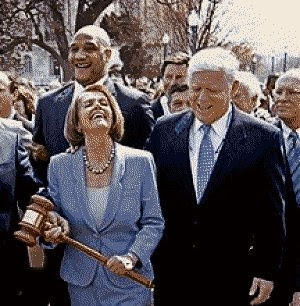 Runner-up headline: The turn of the shrew.

It wasn't but a few months ago that House Speaker Nancy Pelosi was "laughing off" suggestions that Democrats might lose their Congressional majorities. In an interview with Roll Call, Pelosi stated Democrats would "definitely" retain control with "much more than a simple minority."

So confident, however, is Pelosi that today's The Hill reports that the Speaker is trying to build a legal war-chest to fend off investigations by a GOP majority.

In a fundraising letter for the Democratic Congressional Campaign Committee, Pelosi says if Republicans take back the House, they'll initiate "endless investigations against President Obama" and "bring back the days of Ken Starr and the politics of personal destruction."

"Remember a Republican-controlled Congress that devoted more time to subpoenas and investigations than to solving our country's problems?" Pelosi asks. "There is far too much at stake for our country now to allow it to happen again."

Rep. Darrell Issa (R-Calif.), the ranking member of the House Government Reform and Oversight Committee, has shown himself willing and eager to be a thorn in the side of the Obama administration on everything from the BP oil spill to the Joe Sestak job offer. Few doubt that he would use a chairmanship to ramp up those efforts.

I'll alert the media: it turns out that Nancy Pelosi is a two-faced hack, in addition to the most radical Speaker in American history. Her legacy: economic destruction.

And if Americans can take back the House, investigations will be the least of her concerns.

Put that aggravating tart in jail.

Hope the old bat stays alive long enough to stand trial for the destruction of the US Constitution that she, Reid, and Obama performed in passing Obamacare. Hope she brings that giant gavel and that George Foreman looking guy in the background with her to court.

The "people's business" apparently doesn't include identifying corruption in Congress and/or the White House. It means ramming programs and costs down the throats of the people and taking away more of their liberties. How can she say that with a straight face? Nevermind, I forgot. She lost all ability to change expression with the last Botox blast.

And your tax payer funded boozing plane rides should be the first thing investigated!

WTF! Did she REALLY say that? "My responsibility is to protect and preserve my incumbents"?

Hey Nancy, I thought your job was to serve "the people" of this crumbling nation.