I'm sure California taxpayers are relieved to discover that their hard-earned funds are subsidizing gambling by welfare recipients (including millions of illegals). 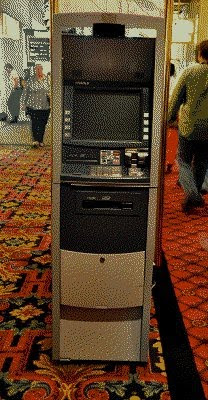 California welfare recipients are able to use state-issued debit cards to withdraw cash on gaming floors in more than half of the casinos in the state, a Los Angeles Times review of records found.

The cards, provided by the Department of Social Services to help recipients feed and clothe their families, work in automated teller machines at 32 of 58 tribal casinos and 47 of 90 state-licensed poker rooms, the review found.

State officials said Wednesday they were working to determine how much money had been withdrawn from casino ATMs by people using the welfare debit cards...

...the system of paying out welfare benefits via bank cards was created under Schwarzenegger's predecessor, Democrat Gray Davis.

...The cash portion of California's welfare benefits comes from the Temporary Assistance for Needy Families program... ...Each year, California gets $3.7 billion from the federal government for the program, while state and local governments kick in an additional $2.9 billion...

...Global Cash Access, a Las Vegas firm that provides ATMs and other equipment for more than 1,000 casinos in the United States, started programming their machines to reject welfare cards more than a decade ago.

"Unless a state tells us to allow access to their EBT cards, we will continue to block these cards from being accepted at our devices," said Katie Lever, the firm's general counsel. "It's really easy to do."

It turns out, then, that taxpayers across the U.S. are also helping to subsidize gambling by welfare recipients.

But, hey, Cali's budget deficit is only $19 billion -- and the country's is only roughly $1.6 trillion -- so the amount involved here has got to be a tiny fraction of that huge amount.

The Elector of Saxony said...

If you think about it, what's the difference really? If we now require no work, if we now will subsidize a permanent underclass of able-bodied people who live on government handouts, who cares if they use the money on gambling, booze, or even drugs? It is a corruption which allows the mass of non-working voters to simply vote money out of the pocket of the fewer and fewer taxpayers who go to work every day. If we shall not require the able-bodied to work for their keep at least in part, what on earth is the difference? The money destroys the character of those who receive it whether they buy hamburgers or lotto tickets with it.

Because half the population now pay zero taxes, why will they stand up for the soon-to-be less than half who pay? If the indolent and the stupid have a right to food, clothes, shelter, and medical care out of my pocket, I guess they have a right to get their drink on and go to the slot machines too. I say good job, California. You are showing the rest of the country the way....to utter ruin.