An open letter to Republican members of the Senate Judiciary Committee

For Elena Kagan to move to a vote in the Senate, at least one Republican on your committee must accede to end debate. I suggest you hold firm and refuse to end debate.

This Democrat-controlled Congress and this Democrat President have declared war on the American people. Against the clear wishes of the people: 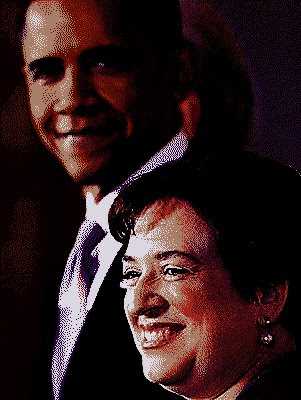 • they have passed a multi-trillion dollar bonanza of federal spending aimed at saving government, not private sector jobs, thereby rewarding their union supporters at the expense of subsequent generations;

• they have rammed through, without a single Republican vote, a brand new entitlement program -- socialized medicine -- when the country can least afford its existing entitlements;

• they are attempting to use unaccountable bureaucracies like the EPA to levy crushing new energy taxes, which will allow an unelected, fourth branch of government to completely control industrial policy;

• they aim to jam through thousands of pages of financial regulation that not a single representative has read, the effects of which cannot be predicted, and that doesn't address the root cause of the economic meltdown: the government-sponsored entities Fannie Mae and Freddie Mac;

This egregious band of career, Leftist politicians have made a mockery of representative government because, even as the American people prepare to boot them out of office in November, they plot to defy the will of the people.

This band of Statists has declared war on the GOP and the American people.

It's time to stop playing patsy and refuse to vote Kagan or any other non-originalist nominee out of commitee.

They've Pearl Harbored the American people enough. It's time for our Midway.

I say as soon as the Republicans gain control in either house they need to be known as the "Brakes" party. They need to apply the brakes to Obama's runaway train or we are all going to crash.

His challenge for next year is a little spooky. Does he know what the commission is going to say? VAT, higher taxes?

Like I've said before- if we band together his power goes away.

It makes me sick to think Kagan is a breeze to get in. She is the enemy and will be the enemy until the day she dies-she will cause untold harm to this country with her PC and Ivy League garbage.

I just don't understand our side-the pREgressives know this is a war and Republicans? Patty cake.

Why do we know we're at war with radical Islam and the dems don't but don't realize they're out to destroy us?
MM

Doug, thanks for calling this rule out! I've written a letter to my senator, John Cornyn, who serves on the Judiciary committee urging him to cast a no vote to move the confirmation out of committee and also requested that he ask his Republican colleagues to do the same. Unfortunately, I'd be willing to place a substantial wager that Senator Pansy Grahamnesty will be the minority vote cast that leads to Kagan's confirmation.

Oh, it is already a "done deal" --- emphasis on "DEAL".
The GOP leadership are Progressives who agree with the aims, but not the speed.

If you have trouble with that statement, let me ask: What difference is there between current Dumpocrat policies and the Titular head of the GOP (McCain)'s ACTIONS & Legislation (supports, passed, voted "yay" and proposed)?

He HATED GWB's Taxcuts (he said they were "only for the rich), He limits the 1st Amendment... I could go on & on, but people value info when they must dig it out on their own.
It isn't hard to find.

Peter - that's precisely why you see me support J.D. Hayworth for U.S. Senate.

It will take a long time, but there is no alternative to throwing off the reins of stupidity inside the GOP.

Lindsey Graham and John McCain are disgraceful. They're Arlen Specter with 3% more integrity.

Now, consider Jim DeMint, Michelle Bachmann, and Paul Ryan... we have some good talent and they need help.