Sitting down? I don't want to catch you off guard, but a powerful Democrat union boss said that President-elect Obama lied about not having contact with disgraced Governor Rod Blagojevich about his vacated Senate seat. 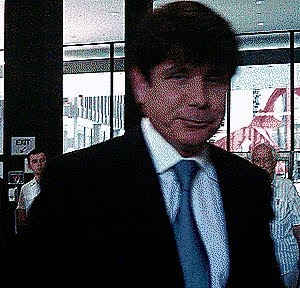 Top union leader Thomas Balanoff said he was at dinner the night before the November Presidential election when he got a call that was blocked... So he didn't take it.

Later he listened to his messages: "I walked outside, listened to it and it was from President Obama," Balanoff said.

"Tom, this is Barack, give me a call," the soon-to-be President-Elect said on the message... After Balanoff sent word through an Obama aide to call him back, Obama returned his call later that night.

"Tom, I want to talk to you with regard to the Senate seat," Obama told him... Balanoff said Obama said he had two criteria: someone who was good for the citizens of Illinois and could be elected in 2010.

Obama said he wasn't publicly coming out in support of anyone but he believed Valerie Jarrett would fit the bill.

"I would much prefer she (remain in the White House) but she does want to be Senator and she does meet those two criteria," Balanoff said Obama told him. "I said: 'thank you, I'm going to reach out to Gov. Blagojevich."

Balanoff then described a Nov. 6, 2008 meeting he had with Rod Blagojevich to recommend Valerie Jarrett for Barack Obama's Senate seat.

Curiously, most reporters appear to be ignoring the fact that Obama, on several occasions, denied having contact with Blago either directly or indirectly.

In December of 2008, for instance, he flatly denied any discussions:

President-elect Barack Obama said Tuesday afternoon that he has had no dealings with Governor Blagojevich over his replacement in the Senate... 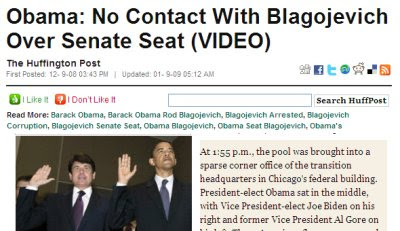 "I had no contact with the governor or his office, and so I was not aware of what was happening," Mr. Obama said. "And as I said it is a sad day for Illinois. Beyond that I don't it's appropriate to comment."

And on another occasion that same month, Obama repeated the claim:

In December 2008, Obama said he was "appalled and disappointed" by the revelations that the Illinois governor was involved in a "pay-to-play" scheme to fill his Senate seat.

"I have never spoken to the governor on this subject. I'm confident that no representatives of mine would have any part of any deals related to this seat," Obama, then the president-elect, said at the time.

But the union boss recalled things differently, testifying under oath that Obama was directly involved and, therefore, that he lied about his wheeling-and-dealing over potential Senate appointees.

Surely some pro journalists could figure out these discrepancies, what with their layers upon layers of fact-checking. Though with Journolost (sic) shut down, keeping all of the narratives straight -- between Newsweek, the New York Times, NBC, Rahm Emanuel and David Axelrod -- must be exceedingly difficult.