Word on the street has it that Orszag lashed out at Obama and his merry band of socialists Keynesians.

Mr. Orszag, whose publicly stated reasons for leaving were that he was exhausted after years in high pressure jobs and also that he wanted to plan for his wedding in September -- 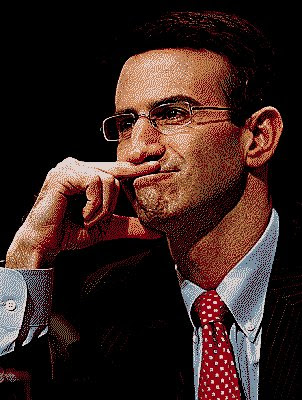 [Orszag] is seen as the guardian of fiscal conservatism within the White House... the budget director has become increasingly frustrated with the administration’s [lack of] caution on longer-term fiscal restraint.

...Mr Orszag, whom Mr Obama has dubbed a 'propeller-head' because of his brilliant facility with projections and spreadsheets, has tried but failed to convince his colleagues to “step up the action”, according to one insider.

In particular, he has collided with the political team, led by Rahm Emanuel, Mr Obama’s chief of staff, over Mr Obama’s 2008 election pledge not to raise taxes on any households earning less than $250,000 a year [which] would put all the fiscal emphasis on draconian – and highly unrealistic – spending cuts, or else pushing the marginal tax rates on the very rich to confiscatory levels...

“Peter feels strongly that this is a pledge that has to be broken if the President is to take a lead on America’s fiscal crisis,” says an administration official not authorised to speak on the matter.

David Axelrod? Is that you?

Tyler Durden offers the executive summary: "This bankrupt country truly deserves all of its elected individuals."

Uhhh, have you seen Orszag's fiance? Dude, if she said she wanted me to devote the next few months exclusively to planning our wedding, I would not hesitate. Let's see. Plan my wedding to a smokin' hot babe or hang around with Emanuel and Axelrod. No brainer. I have to believe it.

So you think Orszag is credible? So do I. I worked for the man. He was one of the smartest numbers guys in govt. The Obama administration has, indeed, moved too slowly on the long term debt situation. So now that we've got a serious proposal from the the commissioners, let's see who blocks it. Already, Boehner is hemming and hawing, trying to figure out how to avoid looking like a liar.

Note also: D.O said that deficits will not be resolved without tax increases because it's impossible. And D.O said the health care plan was necessary because it will reduce the deficit by 100 billion/year. And D.O said the stimulus averted a depression, that Tea Partiers have absolutely no clue as to how close we came to going off an economic cliff.

Orszag got tired of being the only honest voice in Washington, working for a president who hasn't publicly stood up for the truth, cowed by know-nothings and dealing with cowardly dems and phony conservatives who pander to economically illiterate ideologues on the right.