Congratulations, Illinois: you win the national title for the highest per capita budget deficit _and_ the most ridiculously underfunded pension plan!

Earlier today, the State-Journal Register reported that Illinois just can't seem to come to grips with its budget deficit nor its nearly $7 billion in unpaid bills.

Fitch Ratings dropped the rating a step, from A-plus to A, which Fitch said “reflects the continuing unwillingness of the state of Illinois to take action to address its significant budgetary problems. The recently enacted FY 2011 budget does not begin to address the current operating gap, relying almost entirely on various forms of deficit financing to close the gap.”

When they approved the budget last month, lawmakers acknowledged the state would end the next budget year with about $6 billion in unpaid bills.

The best indicator of a state's fiscal health is the cost to insure against the state defaulting on its debt (i.e., a failure to make bond payments). The higher the cost for this insurance, called a "credit default swap" or CDS, the more investors believe the state will become insolvent. This week, the cost of Illinois bankruptcy insurance rose to its highest level ever.

The cost of insuring Illinois bonds against default rose to a record high as state lawmakers confront a $13 billion budget gap for the year starting July 1. 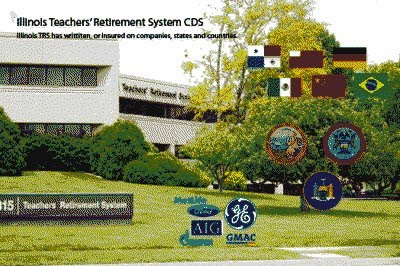 “If the spread is the widest, it says the problem is bigger than it’s ever been before,” said Peter Hayes, who oversees $106 billion of municipal bonds for New York-based BlackRock Inc. “It’s a reaction to the inability to pass a budget. We’ve seen a greater unwillingness from Illinois and the market is reacting to that.”

Legislators in Illinois passed a provisional $25.9 billion fiscal 2011 spending plan that’s about $13 billion short, and are resisting Governor Pat Quinn’s proposed $3.7 billion debt sale to make a pension payment and help close the gap. Lawmakers recessed last month without providing a way to cover the pension obligation and pay $4.5 billion in other bills.

Unwilling to play second fiddle, the numb-skull Democrats who run Illinois' pension funds appear to have done the state legislators one better. For example, it turns out the party hacks who run the Illinois teachers' retirement system have created one of country's most underfunded retirement plans (probably second only to Social Security). 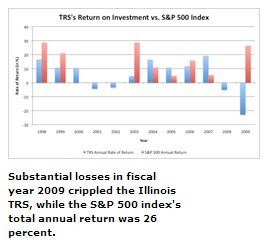 Dale Rosenthal, a former strategist for Long Term Capital Management, the hedge fund known for its epic collapse in 1998, and a proprietary trader for Morgan Stanley, has seen his share of financial complexities... But when shown a seven-page list of derivatives positions held by the Illinois Teachers Retirement System as of March 31, obtained by Medill News Service through a Freedom of Information Act request, the University of Illinois-Chicago assistant professor of finance expressed disbelief.

“If you were to have faxed me this balance sheet and asked me to guess who it belonged to, I would have guessed, Citadel, Magnetar or even a proprietary trading desk at a bank,” Rosenthal said. 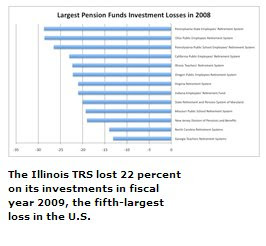 The fact that the sheet doesn’t belong to one of those high-flying hedge funds, but to the $33.72 billion pension fund that serves more than 355,000 full-time, part-time and substitute public school teachers and administrators working outside the city of Chicago, is perplexing to those interviewed for this story.

How bad is it? After losing $4.4 billion on investments in fiscal year 2009, and 5 percent on investments in fiscal 2008, the teachers’ pension is now underfunded by $44.5 billion, or 60.9 percent... For the quarter ended March 31, according to derivatives experts who studied TRS’ financial documents, the fund lost some $515 million on its derivatives portfolio. Since then, the fund’s derivatives positions have likely soured further, the experts said, due to worsening financial conditions in Europe.

In other words, fiscal disaster may be closer than it appears in the mirror.

Congratulations also go to Mayor Richard Daley (D-Machine), who has rung up one of the highest city budget deficits in the world.

Bonded debt and long-term leases have risen much faster than the city's property-tax base under Mr. Daley and now amount to about $5,600 for each Chicagoan. Then there's billions in unfunded pension liabilities — another $5,000 per Chicagoan — and one of the deepest municipal budget holes in the country.

But don't worry, Chicagoans will, I'm sure, continue to keep electing liberal Democrats to high office until the day the city collapses.

When it comes to fiscal stupidity, Democrats always take the Gold, Silver and Bronze medals. Plus Brass, Tin and Cardboard as well. The latter of which will be the construction material for a lot of homes in the state before long.

Welcome to Zimbabwe on Lake Michigan.

Get off the ship!