As if you needed another reason to short BP: 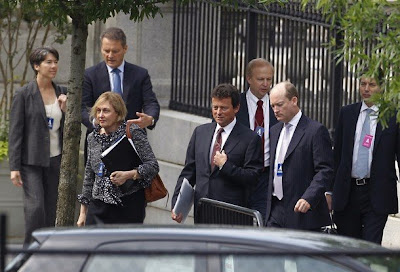 A senior Obama aide said early Wednesday the White House intended to use every "legal device" to make BP meet the costs of cleaning up the Gulf states and restoring the region...

...In a late night Oval Office primetime address Obama vowed to make BP pay for its "recklessness" in triggering the nation's worst ever environmental disaster which has left millions of gallons of oil sloshing around in the Gulf.

In his speech laced with battle tones, he warned America could be left fighting the "epidemic" of the massive oil spill on its southern shores for years to come.

Yes, you read that right: BP's top outside counsel appears to be none other than Jamie Gorelick, the world-renowned Mistress of Disaster.

You know, the former Clinton crony responsible for building the wall between the intelligence community and law enforcement that helped lead to 9/11. Oh, and after that success, Gorelick landed at Fannie Mae. There, she helped orchestrate all sorts of interesting accounting practices while pulling down $26 million, leaving just before the entire place imploded.

Now that I think about it, hiring Gorelick may have been a good move by BP. Usually when The Mistress of Disaster's involved, it's the American people who have to absorb the trillion-dollar hit.

I was absolutely STUNNED to read that BP had hired Gorelick.

This is a sure sign that something shady is going on, behind the scenes.

So that's what the smell is! Sweet, sweet desperation.