Papa B sends in an Act for America update:

Last week, a Vanderbilt University Muslim chaplain publicly acknowledged what those of us who study shariah Islamic law know... Awadh Binhazim, when pressed on whether or not shariah Islamic law requires the death penalty for homosexuals, asserted that yes, it does. Furthermore, he stated: "I don’t have a choice as a Muslim to accept or reject teachings."

...Awadh Binhazim is listed on the Vanderbilt website as "Adjunct Professor of Islam at the Divinity School" and is described by Vanderbilt University officials as "the university’s Muslim chaplain." 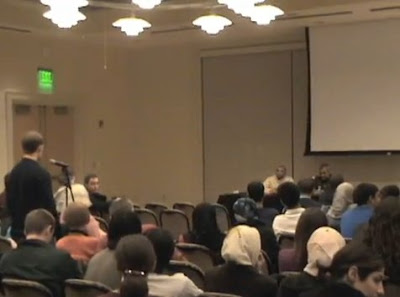 Question: Under Islamic law, if a homosexual person began to engage in homosexual relations on an ongoing and permanent way, with no intention of quitting, then the punishment under Islamic law would be death... unless, you know, he agreed to quit. As a practicing Muslim do you accept or reject this teaching of Islam? 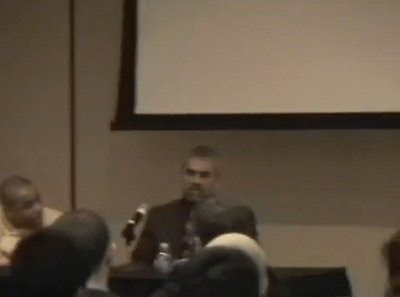 Answer: ...I don't have a choice as a Muslim to accept or reject a teaching. I go with what Islam teaches.

...this is captured in other religions as well... so, the punishment is Islam is certain rules... probably a lot of time to explain it... you cannot prosecute someone just because you think they are homosexual. There has to be clear proof... 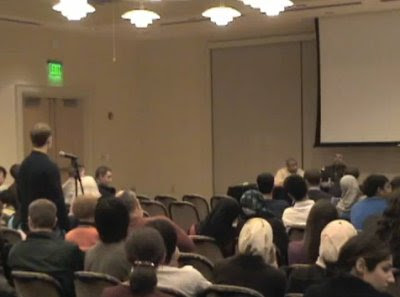 Question: Under Islamic law, is it punishable by death if you are a homosexual? 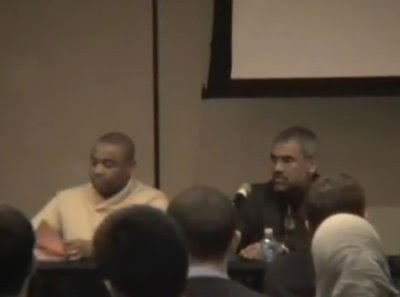 We encourage you to contact Vanderbilt University—especially if you are an alumnus and/or a donor (and forward this [message] to others). Respectfully but firmly ask that the university publicly and unequivocally condemn Binhazim’s statement as repugnant and incompatible with the laws of American society. You can call or email the Vanderbilt Office of Public Affairs... Phone: 615.343.1790... Email: beth.fortune@vanderbilt.edu...

We must make it crystal clear to those like Awadh Binhazim, and all those who agree with his belief in oppressive, intolerant and extremist shariah Islamic law:

• That this belief is repugnant to us and we will tirelessly speak out against it and those who advocate it.

• That shariah Islamic law is incompatible with American civil society and constitutional law.

• And that we will oppose any and every effort to advance shariah law here in America, in whatever form it takes.

at 8:04 PM
Email ThisBlogThis!Share to TwitterShare to FacebookShare to Pinterest
Labels: Education, extremism

"...this is captured in other religions as well... so, the punishment is Islam is certain rules... probably a lot of time to explain it... you cannot prosecute someone just because you think they are homosexual. There has to be clear proof..."

Gotta admit, the radical had a point. The Bible indeed has this punishment for homosexuals.

Deut 17:6 says: "By the mouth of two witnesses or three witnesses shall he that is to die he put to death."

What is the chance that a gay couple that knows the punishment for gay sex will be caught in the act by two witnesses? Surely they'll draw the drapes and lock the doors, right? (said a bit tongue-in-cheek)

Oh, there's more to that law than meets the eye. According to Biblical law, the gay couple had to be warned by these witnesses that what they were about to do was punishable by death. Only when the couple says, "I know, but so what?!" and then engage in their sex does the punishment actually apply. In other words, it's next to impossible to carry out the punishment. Thank God!

Of course, in Sharia law, all this stuff about witnesses and warnings will, I suspect, be tossed out the window faster than you can say "Umar Farouk Abdul Mutallab." Eh, maybe I should've used a better example, such as "Abdul."

As a Vanderbilt Divinity grad, I have a close-up interest in this controversy. I have posted a comprehensive review, including the full text of Vandy's response, on my own blog.

"Answer: ...I don't have a choice as a Muslim to accept or reject a teaching. I go with what Islam teaches."

It is wrong to persecute this man. The Muslim chaplain was asked a direct question about what Islam teaches and he answered it factually. That is a FACT. Should he have lied instead? You know he is a Muslim chaplain and he is free in America to believe in the tenets of this faith.

This is very stupid. You are obviously being racist. The problem is that Judaism and Christianity teach the same thing. Yet because most Muslims are non-white, it seems alright to attack Islam.

Plus let me ask the so called Christians and Jews of America, who do they follow? Is God not superior to manmade laws? I am not asking people to do any violent acts- God forbid.

However as a logical thought. If someone has conviction a God exists wouldn't it be right for the person to believe in the superiority of the laws of God over manmade laws.

However if you want to be fair, then ban Christianity and Judaism as well. They are also equally violent religions if you look at their history.