Greer, a former Crist campaign executive, set up a shell company called "Victory Strategies LLC" to which he diverted as much as $125,000 in GOP funds. 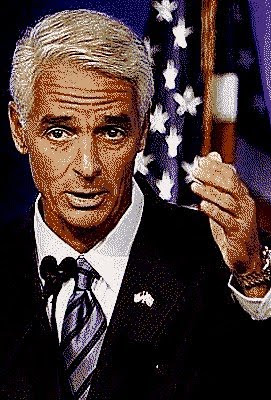 Gov. Charlie Crist personally signed off on his former Republican party chairman's confidential fundraising role with the state party – according to Jim Greer's attorney, whose allegation contradicts the governor's statement that he "didn't know anything'' about the deal now part of a criminal investigation.

"Jim thought a change would be a good idea and I said, 'Whatever you think needs to be done, and if you need to bring in Delmar, that's fine,' " Crist said...

"The governor knew about Victory Strategies from the very beginning,'' Chase said. "They all worked on it together. . . . They saw it as a way to save money.''

Greer was a little-known councilman in Oviedo who had worked on Crist's 2006 campaign for governor when he was tapped to lead the Republican Party of Florida. Allegations that he used party money to live a life of luxury forced him to step down in January.

I have exactly the same level of confidence that Crist's ethics are above reproach that I have his tan is legit.

dittoes on the tan

everyone knew Crist was lying, and he and his buds were ripping off the donors.