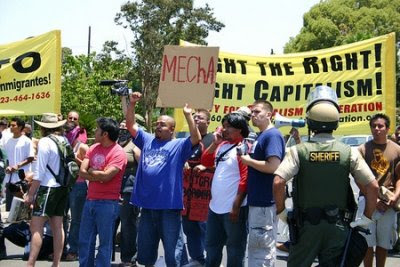 So says a veteran Beltway attorney who just reviewed a request that the FCC monitor "hate speech" and "misinformation" online. Submitted by the "National Hispanic Media Coalition" and a bevy of radical Leftist groups, the pleading (PDF) represents an ominous harbinger for the the First Amendment under Democrat rule.

The racial separatist groups behind the pleading -- including NHMC, the League of United Latin American Citizens (LULAC), Nosotros, Esperanza Peace and Justice Center, et. al. -- appear to be operating as shadow arms of the Mexican government. They evangelize open borders and amnesty while repudiating American sovereignty.

How else to explain this document, the obvious intent of which is to prevent Americans from even discussing the invasion of America by millions of illegal aliens?

As NHMC has awaited Commission action, hate, extremism and misinformation have been on the rise, and even more so in the past week as the media has focused on Arizona’s passage of one of the harshest pieces of anti-Latino legislation in this country’s history, SB 1070.

Harsh in the sense that it simply enforces federal immigration law? Or harsh in that you don't like our southern border?

As traditional media have become less diverse and less competitive, they have also grown less responsible and less responsive to the communities that they are supposed to serve. In this same atmosphere hate speech thrives, as hate has developed as a profit-model for syndicated radio and cable television programs masquerading as "news".

Gee, I wonder who they're targeting? Are those red laser dots I see on the foreheads of Rush Limbaugh, Sean Hannity and Mark Levin?

The Internet gives the illusion that news sources have increased, but in fact there are fewer journalists employed now than before.

You mean pro journalists like Dan Rather and Jayson Blair? Kewl!

The lack of hard-hitting, fair news is felt deeply in communities of color. Traditional media have never been particularly diverse, and rapid deregulation over the last two decades has significantly reduced opportunities for people of color to own and control such media...

Maybe you could start with the lily-white "talent" at MSNBC? They need some diversity!

Hate speech against vulnerable groups is pervasive in our media—it is not limited to a few isolated instances or any one media platform... Indeed, many large mainstream media corporations regularly air hate speech, and it is prolific on the Internet. Hate speech takes various forms, from words advocating violence to those creating a climate of hate towards vulnerable groups. Cumulatively, hate speech creates an environment of hate and prejudice that legitimizes violence against its targets.

Put simply, the radical Left intends to suppress real news stories that highlight the toll of illegal immigration. Consider today's report of the murder and rape spree in the state of Washington conducted by illegals who have been deported on multiple occasions.

One woman is dead and two others were raped recently and police say each crime was committed by a different illegal immigrant. One of the sexual assaults happened just hours before the Seattle city council passed an ordinance boycotting Arizona over its new immigration law. 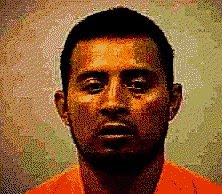 Gregorio Luna Luna had a history of beating up his live-in girlfriend Griselda Ocampo Meza. He was also in the U.S. illegally. On May 1, Luna Luna was deported to Mexico. Three weeks later Meza was murdered in her apartment in a violent knife attack.

A suspected rapist in Edmonds, Washington has been deported at least 4 times... [another] illegal immigrant just convicted of his possible 3rd strike in Whatcom county- a rape of a homeless woman- has been deported to Mexico five times...

...Washington State ranks 11th in the nation in the number of illegal immigrants with an estimated 150,000. They make up 2% of the state's population, but account for 4.5% of those in Washington prisons. In Franklin county, 14% of the jail bookings are illegal immigrants.

Currently, over half of the individuals on the Washington State Patrol's Most Wanted List are suspected illegal immigrants. 18 of the 26 on the list are Hispanic with no place of birth identified. Most are wanted for vehicular homicide and they have languished on the Most Wanted list for several years.

There are about 50,000 felony warrants currently issued in Washington State and according to a source in the U.S. Marshall's office between 30-40 percent are believed to be illegal immigrants.

The intent of the NHMC pleading is obvious. Crowd out the free market with government-dictated "community standards", which will help license speech. Reinstitute the modern equivalent of the "Fairness Doctrine". And create more government-run media outlets like NPR.

I guess I should shut up now. Even discussing this topic is hate speech.


Related: Illegal Immigration by the Numbers.

Maybe they had better worry about their own side of the border from what I have seen.

I hate hate speech almost as much as I hate people who hate hate speech. I hate to say it, but I hate being called a hater just 'cause I hate Dear Leader. Do I need help?

I maybe shouldn't take this so lightly, but I seriously doubt its going anywhere - first ammendment written all over it. Who will be the decider of what constitutes hate speech?

Mmmm. I smell SPAM! Maybe catharine can fry us some up?

Oh, and they're going to have a hard time stifling all the free speech against the seditious reconquistas!

catharine - Hey! Genuinely its really possible to royally pi&& people off by promoting your spam on blogs. Get a real job.