Three data points for your consideration: 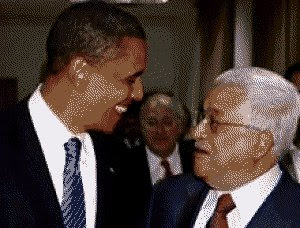 Egypt has refused a request by Arab doctors to bring food and supplies into the Gaza strip. Last weekend, the Arab Physicians Union submitted a request to Cairo to allow 400 tons of food and construction material into Gaza; the request was refused by the government.

• Obama announces Terrorist Stimulus Plan
The United States will pay Hamas and Fatah nearly half a billion dollars, according to CNN. Barack Obama announced that the U.S. will send $400 million in development aid to the Palestinian territories and called the current situation "unsustainable".

Let me get this straight. Our economy has cratered. Unemployment is nearly 10 percent. The national debt is expected to exceed our gross national product by next year. And we're giving $400,000,000 to our mortal enemies in Gaza?

Yep. That's pretty much it.

Our Community Organizer in Chief is doing what he does best - giving away other peoples money. And where is the accountability?

You could also use your same words from the Palestinian perspective:

I agree Israel wants and should prevent rocket attacks, but try punishing those perpetrating the rocket attacks rather than the entire population and I think Israel might get to see why the majority of the world is becoming increasingly angry. Hamas was, surprisingly, democratically elected. I can only see the population getting more and more radicalized unless Israel works hard to support more centerist candidates.

So was Hitler. Same result - if Hamas gets their way - 6 million Jews slaughtered.

Well, maybe its time someone kicked Isreal's ass. But, I just don't approve giving away anymore of our money, until we can stand on our own feet again financially. I'd like to see our budget like it was when Clinton handed it over to Bush. For the first time in many administrations, Clinton balanced the budget and there was actually a surplus, until Bush got his hands on it. Bush handed it over to Obama with the largest deficit in history!

Hi Doug, I thought you might appreciate this Hamas satire:
http://wejew.com/media/8746/The_One_About_Hamas_-_A_Satire_from_No_Laughing_Matter/