To be fair, I'm not sure if the distinguished Reverend Jeremiah Wright was actually in attendance (one can only guess), but the New York Post reports that two of the most vicious racists in the world had an opportunity to meet last week. Mahmoud Ahmadinejad, the hirsute midget despot and Hitler impersonator (word has it that's the description he prefers), held a 'hush-hush' meeting with Nation of Islam bigot Louis Farrakhan.

As an aside, it's not at all far-fetched to presume that President Obama's friend and mentor Jeremiah Wright could have attended the meeting. After all, Wright and Farrakhan traveled together to Libya 25 years ago in order to pay their respects to the murderous nutcase Muammar Gaddafi. 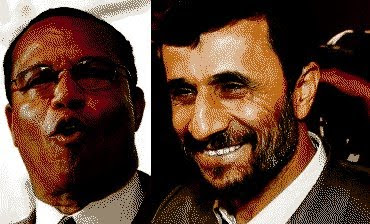 President Mahmoud Ahmadinejad's six nights in New York featured a secret sit-down with militant minister Louis Farrakhan, heckling in a hotel bar, and a fear of being rubbed out that bordered on paranoia... The president shared a hush-hush meal with Farrakhan and members of the New Black Panther Party Tuesday at the Warwick Hotel on West 54th Street...

...On Thursday night... [t]wo well-dressed women in their 40s came in [to the] Hilton Manhattan East], sat at the hotel bar and ordered drinks... One of them caught the attention of the president's security detail, which had set up a station in the hotel lobby. She was soon surrounded by eight angry Iranians, who ordered her to leave. She refused... A manager tried to calm things down. Suddenly, the woman stood up and pointed at the Iranians, yelling, "You stoned my sister! You're murderers!"

While the topic of the Hitler-Farrakhan discussions have yet to be disclosed, I feel comfortable in wagering it did not involve tonight's Jets-Dolphins game.


Update: On second thought, perhaps the real headline should be that Eric Holder's favorite bunch of fun-loving racists -- the New Black Panther Party -- met with Adolphminejad. I feel badly for the rank-and-file members of the Justice Department. The line between good and evil has been blurred so effectively that it's not even clear what side our country is even on anymore.