Good News: Democrats Declare a Regulatory Jihad on Small Businesses, Which Will Only Erase or Destroy 340,000 Jobs Annually

You know it's bad when even CNN doesn't mince words. 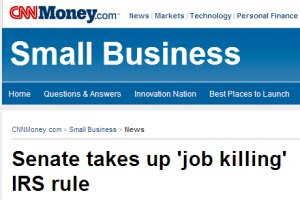 The Senate will also decide whether to repeal a law enacted as part of health care reform that will require small businesses to file millions of new tax forms -- a provision a top Republican calls "job killing..."

A small section of the massive health care law mandates that beginning in 2012, all companies will have to issue a 1099 tax form not only to contracted workers, as they must already do, but also to any individual or corporation from which they buy more than $600 in goods or services in a year.

The IRS Form 1099 is used to document income for individual workers other than wages and salaries: Freelancers get them and businesses send them out. Under the new law, the 1099 form would be used to track payments for services and tangible goods. Also, it requires that 1099s be issued not just to individuals, but to corporations as well.

The result would be millions of additional tax forms...

Chris Wysocki reports that the Democrat-controlled Senate failed twice this afternoon to repeal the disastrous 1099 requirements.

The Barack Obama Death to Small Business Tax Reporting Act of 2010 will stand... Senate Democrats successfully defeated an amendment offered by Senator Mike Johanns (R-Neb) that would have repealed an Obamacare provision which requires all businesses to file Form 1099 with the IRS for every vendor that sells them more than $600 in goods.

President Obama insists the reporting provision is necessary to ensure compliance with our tax laws. Business groups, and anyone with even an ounce of common sense, have pointed out that it is a regulatory nightmare.

Think about a midsized trucking company. The back office would have to collect hundreds of thousands of receipts from every gas station where its drivers filled up and figure out where it spent more than $600 that year. Then it would also need to match those payments to the stations' corporate parents.

See, this is what happens when you hire a bunch of academics who've never worked a real job in their lives and put them in charge of our economy.

Of course, the economic illiterates in the Democrat Party haven't done the complex calculations to arrive at the number of jobs this provision will cost.

The real costs, in dollars and misery, will be shockingly high.

Earlier today on Fox Business, Gerri Willis stated that the rule "...is a mountain of paperwork and will cost businesses about $17 billion [annually]."

My magic calculator puts the number of jobs erased or destroyed by this madness at 340,000 $50,000-a-year jobs. And that will be but one toll of this monstrous 'health care' bill that no one even bothered to read.

Remember to thank a Democrat on the first Tuesday in November.

See, this is what happens when you hire a bunch of academics who've never filed a tax return in their lives and put them in charge of our economy.

At the 2008 media household income of $52,026, for every million dollars of wealth government destroys through its socialist nanny state meddling, it consumes and destroys the annual incomes of about 20 entire families.

(This also implies, at $74k, each average new federal worker that is hired consumes the income of about 1 1/2 families. That helps explain the unemployment rate.)

Per Fox News, the hurdle was figuring out how to close the $19 billion revenue gap that will be caused by the provision's repeal.
That's the problem with fake numbers--there was an assumption that imposing this ridiculous reporting requirement would raise revenue in the first place. The assumption was unfounded. Now some Senators are using that same fake number as the reason for not repealing the provision. So for the sake of trying to track down fake replacement revenue for fake assumed revenue, Harry Reid and Co. will kill thousands of real trees, and real jobs. Idiots.