Reason #1,740 that retail investors have fled the stock market 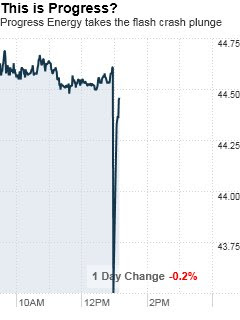 There was another "flash crash" today. Progress Energy (NYSE:PGN) plunged from $44.50 to $4.57 a share in a matter of seconds shortly after 1PM today.

This represents the fourth flash crash since the monstrous May 6th dump that saw the Dow Jones Industrial Average plummet 999 points in about 15 minutes. Intel (NASDAQ:INTC), Nucor Steel (NYSE:NUE) and Seagate (NYSE:STX) were also victims of sudden, unexplained plunges during the summer.

As the invaluable Zero Hedge has warned investors for 18 months or more, the entire stock market appears to be rigged to benefit the high-frequency traders (HFT):

"Whatever their cause, the frequent market outages only feed the sense that the entire market is either a casino rigged by the money never sleeps crowd or a house of cards on the verge of collapse. Neither view, it seems safe to say, is apt to restore investors' dwindling confidence."

The HFTs use monster computers and questionable trading techniques to battle one another, leaving the retail investor out in the cold. The trading volumes tell the tale, as retail investors appear to have fled the battleground.

Karl Denninger calls it "The High Frequency Trading Scam" and warned in 2009 that something akin to a flash crash can and would happen.

It was July 15, and Intel, the computer chip giant, had reporting robust earnings the night before. Some investors, smelling opportunity, set out to buy shares in the semiconductor company Broadcom... The slower traders faced a quandary: If they sought to buy a large number of shares at once, they would tip their hand and risk driving up Broadcom’s price. So, as is often the case on Wall Street, they divided their orders into dozens of small batches, hoping to cover their tracks. One second after the market opened, shares of Broadcom started changing hands at $26.20. 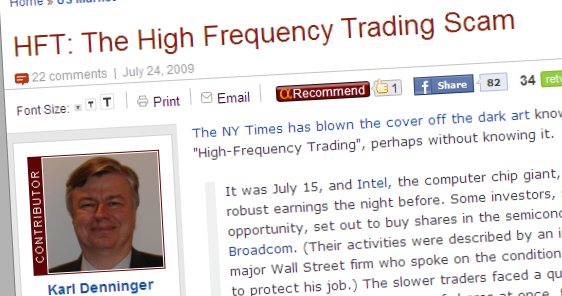 The slower traders began issuing buy orders. But rather than being shown to all potential sellers at the same time, some of those orders were most likely routed to a collection of high-frequency traders for just 30 milliseconds — 0.03 seconds — in what are known as flash orders. While markets are supposed to ensure transparency by showing orders to everyone simultaneously, a loophole in regulations allows marketplaces like Nasdaq to show traders some orders ahead of everyone else in exchange for a fee.

In less than half a second, high-frequency traders gained a valuable insight: the hunger for Broadcom was growing. Their computers began buying up Broadcom shares and then reselling them to the slower investors at higher prices. The overall price of Broadcom began to rise.

In other words, the programs probed for the limit price on the other side of the trade that they would not otherwise be able to determine. But by rapidly issuing and then canceling orders, they've found a way to game the system. And the system has become unstable.

Where the hell are the regulators?

Denninger and Zero Hedge have been asking this question for months. But given that politicians like Barack Obama, Chuck Schumer, Barney Frank, and Chris Dodd are among the biggest beneficiaries of Wall Sreet largess, I wouldn't hold your breath waiting for an answer.

They're too busy regulating light bulbs and french fries.