Is there a rational explanation for Karl Rove's vicious, unmanly and -- frankly -- outrageous attack on Christine O'Donnell?

On Tuesday, the night of Rove's explosion, The Freedomist reported that he had earlier been heavily invested in Mike Castle's campaign. 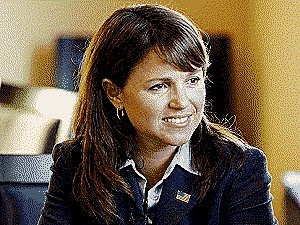 Sources at the Christine O’Donnell victory party revealed to The Freedomist that in December of last year Karl Rove met with Tea Party leaders in Dover, Delaware trying to get them to cut a 'deal' in which they would leave Mike Castle alone and NOT support O’Donnell.

The Freedomist has also learned that Rove was allegedly acting as an operative, although in what capacity it is not known, even as he is playing the role of a political analyst on Fox New in a fair and balanced way...

While Rove's possible affiliation with Castle's campaign hasn't yet been disclosed, I did locate an article that may help shed some more light on the issue.

Mr. Peabody, set the wayback machine to December 2009 and fetch me a copy of the Wall Street Journal while you're at it:

Can Republicans Retake the Senate in 2010?

Probably not, but their candidate recruitment so far has been stellar.

By KARL ROVE
...One feature giving Republicans an edge is that several senate seats are up for grabs because the politicians who were elected to fill them are now serving in the Obama administration. This includes seats formerly held by Mr. Obama and Vice President Joe Biden... Rep. Mark Kirk is a strong candidate to pick up Mr. Obama's old seat in Illinois. Rep. Mike Castle, a popular former governor, could pick up Mr. Biden's former seat in Delaware...

In other words, Rove was shilling for some of the more egregious liberal Republicans last December, especially Castle. A primary challenge by more conservative GOP candidates hadn't even been contemplated by Rove.

Was he a paid operative? Or did he just back the wrong horse, calling his credentials as the all-knowing, all-seeing 'architect' in doubt? Was the attack simply about diminished stature -- whether as a paid consultant or as an oracle for Fox?

That mental exercise is best left to the reader, but suffice it to say that his behavior will only help enrage and energize the conservative base. It's not complicated, Karl: it's only the freaking Constitution, to which neither you, Castle nor the rest of the entrenched Republican establishment seem to give a moment's thought.

That is why we're out to take over the GOP and throw all of the bums out, no matter their party affiliation.

See, that's not too hard to understand, is it, Karl?


Update: Michelle Malkin Rips Karl Rove a New One for His 'Vicious' Attacks on Christine O’Donnell.

I bought a book off a sale table once, by the title of "How to Win Money at the Race Track". (It's methods are no longer viable due to off-track betting)

Their basic premise was simple - if you just want to pick the winning horse, go with the favorite. Something like 70% of the time, you'll be right. You also won't win much of anything in cash, since a favorite is going to have virtually no odds. If, on the other hand, your goal is to win money, you have to bet on the 30% of the times when the long shot wins. Not only that, but you have to eliminate obvious losers - since you have only 30% to work with in the first place. It takes a lot of research. (You also have to practically live at the track) Most people aren't willing to do the homework, most aren't willing to bet on long-shots. Most people would rather pick an easy winner - the favorite.

Karl's job has been to figure out how to help the _GOP_ to win. I suspect that has distorted his viewpoint.

Here is an idea. How about we try to take Karl Rove at his word, and grasp his 'dose of reality' offered was being professional - meaning he was trying his best to advocate for what he thought was best.

Instead, our fine conservative movement has been reduced to a mere product of fashion, hyperbole, image, identity, etc.

So now, many are bizarrely looking for conspiracies and quick to call those on our side condescending labels for having a differing viewpoint.

We used to be able to offer reason, varied views on substance, designed to grow strong policy, insight, political offerings.

Ms. O'Donnell is a very weak candidate, it is simply reality.

We don't need to now vilify, dehumanize, debase someone like Rove, to justify the decision to back O'Donnell. You can stand firm on your decisions without the mythic conspiracy - cabal fantasies.

We have a huge problem, with a great opportunity to defeat the Democrats. Do we self destruct? Or do we provide a movement which uses the best to attract all?

So far, we are seeing some truly regretful offerings from Our own side, in dealing with many. The concept that building unneeded enemies seems lost on some of the finest.

We make it easier for the disastrous Democratic Party, as we weaken efforts to gain the Majorities at such an essential time in US History. Murkowski's write in candidacy is a prime example.

We shall see, but turning on Rove is far from the answer. He can, and all have the right, to come to their own opinion. And objections to candidates who are lackluster - even suicidal - are not always "vicious", they are often desperate efforts attempted save fellow Americans from failure.