Decisions, decisions: the Witch or the Marxist?

No, I'm not talking about Hillary vs. Barack.

Eleven years ago, according to the crack operatives working for Bill Maher, Christine O'Donnell admitted hanging around with Wiccans and dabbling in "witchcraft".

I suggest burning her at the stake. It's the only way to be sure. 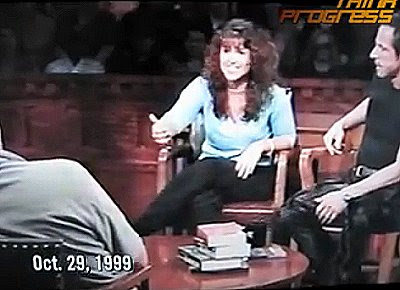 The context of this shocking admission was somehow omitted. After seeing a movie (Carrie?), someone took her to a "satanic altar" but she "didn't know it".

Ah, the peccadilloes of high school. Going to a movie and then visiting a Wiccan altar. Seriously, we should dunk her in water: if she sinks, she's innocent and if she floats, she's a witch.

It would seem that the Fabian Socialists are, however. And O'Donnell's opponent -- a self-admitted Marxist -- is just such an enemy of America.

Which makes the whole point of this 'shocking admission' rather moot if you have children and grandchildren. Because most of us would vote for an unwashed orange juice can over a Marxist at this point.

It would seem that a lot of people have forgotten that elected officials are supposed to serve as proxies for us. And we don't want Marxists in office.

Christine O'Donnell: I dabbled into Witchcraft.

Chris Coons: I dabbled into Communism.

Witchcraft is not real. Marxism is real. Which is REALLY more dangerous?

Senator Robert Byrd did quite a bit more than dabble in the KKK for a healthy portion of his adult life.

Of course, democrats have no problem with this. Let us not forget that their party platform was marketed as one for the white man.

Gee... Is the media reduced to going back to a candidate's HIGH SCHOOL chums for dirt in their character assassination? I want to hear about Harry Reid's problems with potty training and Nancy Pelosi's stage fright incident at the Kindergar...ten Christmas pageant? These are the same propaganda tactics used by the Progressive shills in the MSM to get our current Incompetent-In-Chief elected in 2008!

It is amazing how the Big-Government progressives in both the Demopublican AND the Republicrat parties (yes, I mean YOU Karl Rove) will say and do ANYTHING to get 'their guy' elected. What they don't realize is, most candidates who are the targets of their ridiculous ad-hominem smear campaigns actually receive a BOOST in the polls! Here in Michigan, every pol (both R & D) that used negative smear tactics on their opponent went down in flames in the primary. People have become wise to the tactic, and are demanding from candidates positive answers about their future- not just mud-slinging and propaganda.