Where's the ACLU when you need them?

In late May of 2010, Wellesley, Massachusetts public middle school students took a field trip to the Islamic Society of Boston Cultural Center - a controversial Saudi-funded mega-mosque run by the Muslim American Society of Boston. There, the students were separated by gender and the boys were asked to join the Muslim adults in their prayer. Several of the public school boys took part.

Let's go to the videotape. 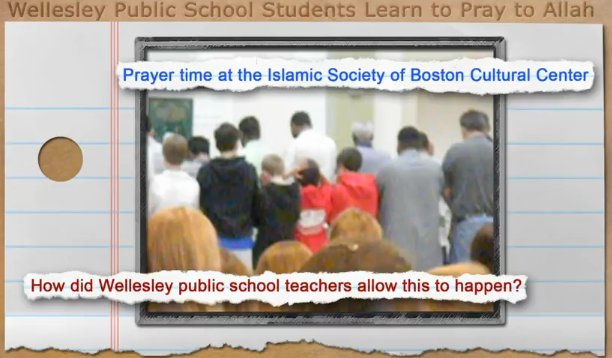 Gee, where are all of those liberals complaining about the separation of church and state?

Contact information for the Wellesley Public School system is here.

at 7:38 PM
Email ThisBlogThis!Share to TwitterShare to FacebookShare to Pinterest
Labels: Education, extremism

Doug, you miss the point. Muslims are good, Jews and Christian are bad, racists.

A poor woman is in hiding becaue of this "religion of peace"(s/b pieces). When the hell are real Americans going to wake up!

radically progessive social experimentalists (liberals) do not equate Islam or mosques as "churches" or "religion". This is an underdog "minority" that needs their "support" to combat the evils of Christianity.