The desperate campaign of Nancy Pelosi's protege Connie Pillich -- an Ohio incumbent -- has unleashed another attempt to stop Tea Party founder Mike Wilson in his tracks. Check out the Democrats' latest mailer, which does everything but paint Wilson as a bloodthirsty animal, trying to break into grandma's house to ensure that she'll never collect on Medicare. 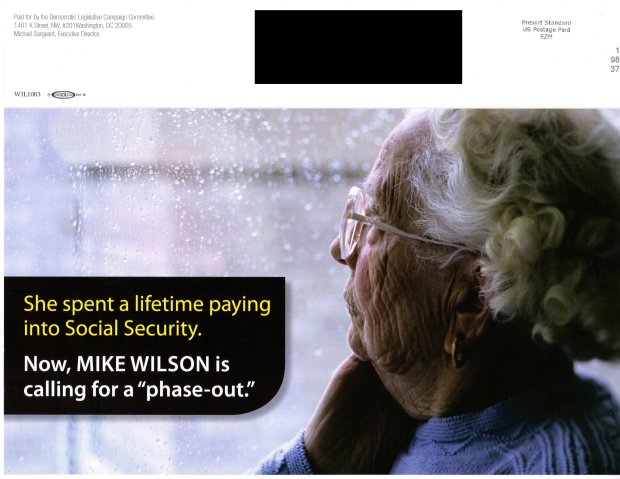 But everyone who has studied the matter knows that the only folks killing Medicare are Democrats. Health Reform Report's latest newsletter offers the troubling statistics. 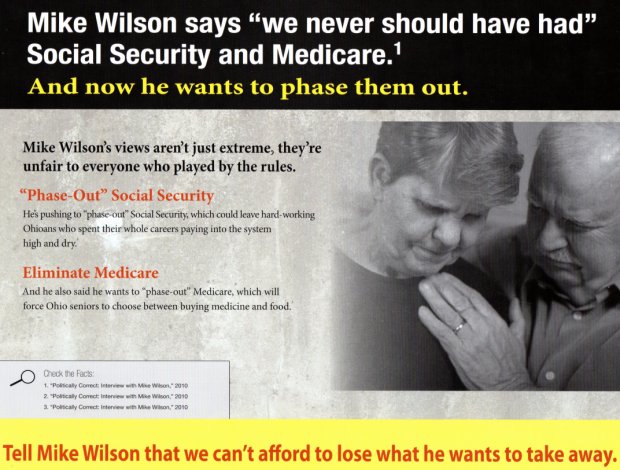 And the Democrats' gouging cuts don't even include the devastating changes to Medicare Advantage. Medicare's Chief Actuary estimates that half of all seniors on Advantage will lose their plan.

Who's sending this garbage out?

Who do you think?

These Marxists are out of control. They are an abomination.

If you've got a few bucks to spare, help Mike to show these leftists the door in November.

at 12:54 AM
Email ThisBlogThis!Share to TwitterShare to FacebookShare to Pinterest
Labels: Democrats, Healthcare, Obama, Pelosi, Reid

Every election the Dems use the "scare the old people" scam. Completely predicable.

Did Wilson not say he wanted to "phase out" Social Security and Medicare? Threatening to phase out these programs doesn't just scare old people; it scares younger people such as myself who have been paying into the system and because of Bush policies, have been unable to make enough to save for retirement.

It scares other young people who are disabled and rely on Social Security to live and Medicare for insurance.

And it really scares those caring for children who have had a parent die (or both). Minor children receive their dead parent's Social Security until they reach 18.

they want death panels to actually deny care for old people, but call us cons evil cuz we want people to control their own wealth and not leave it in the hands of politicians.

not unlike the moral updsidedowness their abortion position:

if you think all babies should go to term and be born (and then adopted if unwanted) you are "EVIL!" in the eyes of the left.

not unlike thei views on ww4:

if you appease misogynistic homophobic genocidal islamists you are wise, and if you want them countered with all due force, then you are "evil!".

the left is morally inverted/perverted = evil.