Land's sakes, that Harry Reid's doing a mahvelous job: unemployment ticks up again in Nevada--this time to a record high of 14.4%

Perhaps Opening the Borders and Raising Taxes Will Help

Oh, wait. The Democrats are already doing that.

27 states experienced higher unemployment in August, double the number of states that saw increases the prior month. Topping the list, thanks to Harry Reid's masterful work, is Nevada. 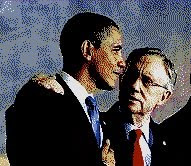 You happy with the economy, Nevadans?

If not, you better take action.

Because Harry Reid's about to unleash his union-fueled war chest on Sharron Angle. If you can spare a few bucks, help her fight back. You don't have to storm the beaches like our grandpappies did. You just have to help out any way you can.