Could someone check the water inside the Beltway? Krauthammer and Rove teeter on the irrelevancy cliff as they brutalize Reagan's 11th Commandment

Charles Krauthammer and Karl Rove both have storied histories backing the conservative movement and, by extension, the Republican Party. But it would appear that they've become far too cloistered, or at least far too invested in the establishment, to truly understand the mood of the country. 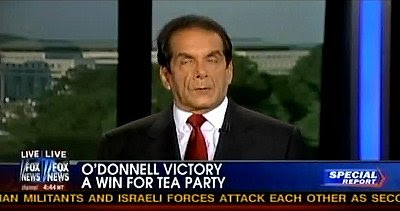 Rove and Krauthammer have now expressly attacked both. And for what? Because their predictions were wrong? Because they had a stake in the losing camps? I don't know and, frankly, I don't care.

It would seem that both analysts think the American people are too stupid to judge these things for themselves. I just hope they had a bad fish dinner a couple of nights ago and come to their senses shortly.

Gentlemen, there's a very simple playbook we're operating by. It's called the Constitution. Mike Castle and his ilk operate unmoored, picking and choosing policy positions like they're throwing darts.

We've had enough of that bulls***. The stakes are too high and the situation too dire to play that game.

"Thou Shalt Not Speak Ill of Another Republican"
Dear Messrs. Rove and Krauthammer: learn it, love it, and live it.

Otherwise, prepare to be flushed down the irrelevancy hole. It's not a tough choice. James Madison or Karl Rove? Thomas Jefferson or Charles Krauthammer?

Gee, what a dilemma.

I'm only partially surprised by this. But like you I simply don't care. These guys are part of the establishment. they will not be confused with revolutionaries. I will guarantee you that after the election when the tea party candidates lead the way and restore the congress to Republicans, both of these guys will be singing a very different tune.

Will Rove feel the same way now that Castle admits he was in contact with Biden last night and Obama today?

I was shocked to hear Rove's comments on Tuesday night. Does he have a contract to work for the Delaware Dems? His comments and subsequent reinforcement of them Wednesday, were totally out of place. The Dems don't have to write attack ads, they simply have to run the clips of the Great Republican Architect.

Your way or the highway, eh, Rove?

I don't know. If you consider Charles Krauthammer to be one of the canniest conservative thinkers of the past two decades, and if you basically agree with 100% of his statements in the past two years, then there are two possibilities here.

b) most of the right wing blogosphere is wrong.

I haven't figured this one out yet, and I don't think it's as easy as some of you folks are making it. I've been reading K-hammer for 25 years and he's never been wrong

I must admit: I am concerned about both the Angle and O'Donnell wins. Yes, I as much as anyone would like to have a restored nation governed by conservative constitutional principles. However, the time for remodeling the house is not while it is burning down. The Democrat progressives are ravaging this nation with their radical legislation; they must be stopped. The way to stop them is to destroy their majorities. Would Castle be my first pick? Not on your life - if I were sure the GOP candidate would win. However, even a bad Republican is better than 99.9% of Democrats. It may be that in eastern liberal states, a Mike Castle is as good as it gets even with his 52% ACU rating (still better than Maine "Republicans" Snowe and Collins with their sub-50% ratings - but you can bet that their Dem rivals would be even worse!)

First, take congressional majorities and put out the fire. After that we can worry about rebuilding the house starting in 2012.

They said the same thing about Reagan... and he crushed Carter.

I think Americans want articulate conservatives who represent their values, not unprincipled mush-mouths like Castle, Crist and Murkowski, who appear unmoored from the tenets of our founding.