“The first thing we started to do was look at houses with more than six voters in them" Engelbrecht said, because those houses were the most likely to have fraudulent registrations attached to them. "Most voting districts had 1,800 if they were Republican and 2,400 of these houses if they were Democratic... But we came across one with 24,000, and that was where we started looking." 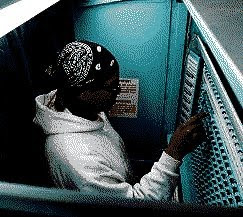 It was Houston's poorest and predominantly black district, which has led some to accuse the group of targeting poor black areas. But Engelbrecht rejects that, saying, "It had nothing to do with politics. It was just the numbers.”

Their work paid off. Two weeks ago the Harris County voter registrar took their work and the findings of his own investigation and handed them over to both the Texas secretary of state’s office and the Harris County district attorney.

Most of the findings focused on a group called Houston Votes, a voter registration group headed by Steve Caddle, who also works for the Service Employees International Union. Among the findings were that only 1,793 of the 25,000 registrations the group submitted appeared to be valid. The other registrations included one of a woman who registered six times in the same day; registrations of non-citizens; so many applications from one Houston Voters collector in one day that it was deemed to be beyond human capability; and 1,597 registrations that named the same person multiple times, often with different signatures...

I find it almost stupefying to have discovered that some of my neighbors support the modern Democrat Party, seeing as how it's mostly funded by public sector union bosses, illegal immigration front groups, trial lawyers, and George Soros-style America-haters.

This is serious stuff. It cuts to the heart of everything the country stands for.

I would support a long prison sentence for any0one knowingly participating in voting fraud.

This is an important story! All I ask is that the surety of the title and the tentativeness of the byline match. The SEIU is either guilty or apparently guilty, but not both.

maybe this is why the thugs aren't afraid of losing the mid-term election.

Phil, Major Nidal Malik Hasan is the alleged Ft. Hood shooter. Does that mean that we can't say that he killed or wounded 45 of our own? Methinks thou doth protest too much. Go kvetch on a MSM site about your concerns...we are simply blog writers and readers. You run in the company of millions of retarded leftists who dismiss reality because it doesn't conform to your rigid (yet atrophied) worldview.

skh.pcola, I humbly accept the first half of your post. The second half is just plain wrong.