What Could Possibly Go Wrong? Barack Obama To Send $60B in Advanced Weaponry to Saudi Arabia, the Largest Single Arms Deal in History 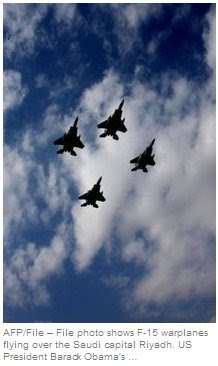 In the largest US arms deal ever, the administration of US President Barack Obama is ready to notify Congress of plans to offer advanced aircraft to Saudi Arabia worth up to 60 billion dollars...

...the administration was also in talks with the kingdom about potential naval and missile-defense upgrades that could be worth tens of billions of dollars more.

...The 60 billion dollars in fighter jets and helicopters is the top-line amount requested by the Saudis...

...the administration will authorize the Saudis to buy as many as 84 new F-15 fighters, upgrade 70 more, and purchase three types of helicopters -- 70 Apaches, 72 Black Hawks and 36 Little Birds, The Journal noted, citing unnamed officials.

Earlier media reports said that to assuage Israel's concerns, the Obama administration has decided not to offer Saudi Arabia so-called standoff systems, which are advanced long-range weapons that can be attached to F-15s for use in offensive operations against land- and sea-based targets.

It's fortunate that the Kingdom of Saudi Arabia is such a tolerant society; much more accepting of different religions and cultures than, say, those Militant Quakers.

I suppose, though, that after the Clintons equipped Red China with guided missile technology in exchange for a measly $50,000 or so in campaign donations, President Obama couldn't stand being one-upped again by Bubba. This deal makes the PRC's technology acquisitions look like child's play.

This news should be what Barry is doing for the US. Instead, he has decided to sell them to the Muzzies. Need more proof?

The Saudis fund terrorists and CAIR. What could possibly go wrong indeed!

$60 billion in defense equipment sold to Saudi. Wanna see the thank you note....