Separation of Religion and State: Why is President Obama Endorsing Muslim Superheroes Designed to Appeal to American Kids?

The comics of my youth left indelible impressions. I still recall the bravery of Sgt. Fury and his 'Howling Commandoes' as they fought the Nazis. The incredible powers of Superman, Batman and Spiderman. The inhuman strength of The Hulk. It's little wonder that impressionable kids around the world gravitate to idealized views of adulthood, placed before them by the comic books' authors. 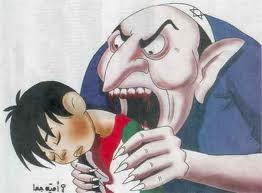 It should come as no surprise then that in the Arab world, comics are often used for purposes of indoctrination: "In Iran, on Al-Quds Day, Iranian TV schedules are filled with cartoons about evil Israelis with red eyes, shooting and murdering innocent doe-eyed Palestinians... For older kids, the heroes fight back, and even get martyred in the cause of Allah... [the shows are used] to reinforce Holocaust denial and anti-Semitic propaganda."

Now a new series of comic books -- featuring Muslim superheroes -- are on sale in the United States. The Ninety-Nine comic series features a set of superheroes, each representing one of the 99 names of Allah.

The comics were first published in Kuwait and are distributed in the United States by Diamond. 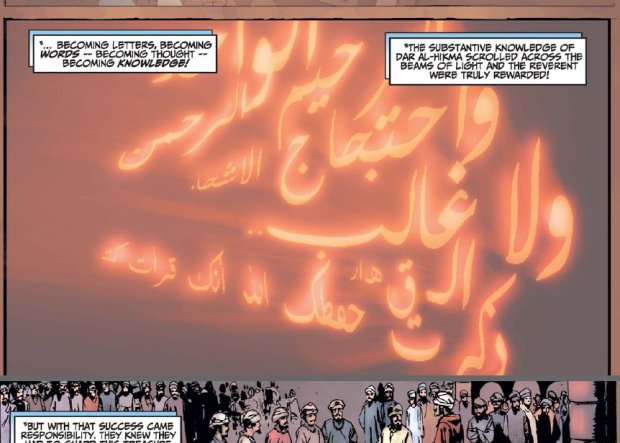 ForwardSyria describes the characters as the brainchildren of Naif al-Mutawa, a psychologist by training.

Following President Obama’s speech committing the US to engage with the Arab world, Mutawa seized the opportunity to propose a crossover with the heroes of DC comics. The deal is underway to have heroes from the Justice League help out their new comrades, Jabbar, Jami, and Widad under the guidance of Dr. Ramzi as they battle Rughal to protect the stones of wisdom. This cast will also find its way to televisions soon, as Teshkeel Media enters into a partnership with UK animator Endemol.

President Obama has gone so far as to praise The 99 at the 2010 Presidential Summit on Entrepreneurship.

The American president heaped praise on Naif al-Mutawa, whose superhero comic book, “THE 99” – ubiquitous at the summit – features Islamic themes. The President said that Mutawa had borrowed a page from Obama's Cairo playbook by introducing Superman and Batman to their Muslim counterparts. “And I hear they're making progress, too,” said Obama.

At the same time, negotiations with a major US cable broadcaster to air THE 99 animation series beginning this fall is in its final stages.

I won't ask why President Obama has praised a particular set of religious superheroes. Suffice it to say that it just seems odd.

I will observe that with or without the president's imprimatur, very little can possibly go wrong with a set of Muslim superheroes destined to leave indelible memories on impressionable young minds.

at 9:54 AM
Email ThisBlogThis!Share to TwitterShare to FacebookShare to Pinterest
Labels: Democrats, extremism, Obama

This is less than 'comical' - it's farcical from the same Islam that becomes catatonic with cartoons.

You do understand that "the 99" in the title is referring to the "99 Names of Allah" do you not? Maybe you didn't

Call me Lennie (not one of Allah's 99 names)

The ultimate judge of this idea is : Will it weaken the Islamic Fundamentalists.

After all, Christian Comics of all kinds have been around for years, from the Catholic biblical comics of the 40s and 50s, up to the modern Archangel series . And the same for animated and movie titles (Veggietales anyone?).

I’ve only read a bit of the 99 series, but it seems to be reflective of secular Islam, not the Wahabi nutty variety. As an example, there are women (!) in the comic with superpowers, who are not simply shackled to men and forced into passive positions. They make their own decisions (guided by Allah, of course), fight, and don’t move around inside a mobile tent all day long.

So we’ll see. Perhaps this even could be the first chip of an avalanche that will bring Moslems out of the dark ages and into modern civilization. Who knows?

Hi.
I think this is only the tip of the iceberg.
the assault on children their minds is being organised on a much bigger scale.
A leading Turkish textbook publisher has signed a marketing deal with a publishing business giant for its English teaching set. Zambak’s set “The Learning Ladder” will be marketed to the world by Cambridge University Press. He also indicated that their English textbooks were prepared based on surveys of schools and students in 38 Turkish provinces, taking into consideration the realities of the country.“What makes the books unique is that they are story-based and message-oriented. The book chapters contain stories about universal values that are suitable for children.”