Every road is an on-ramp to fun with the startlingly new, surprisingly sexy Dodge Deflation™" 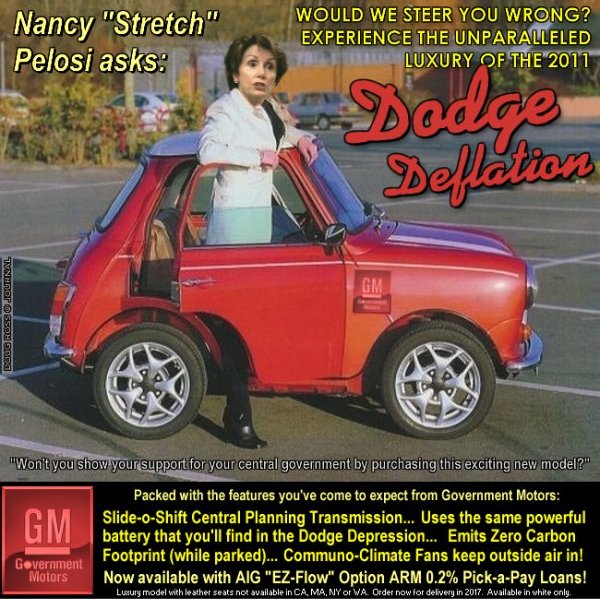 It's fun, but Democrats would design a vehicle that runs on their own hubris, which is actually pulled by taxpayers in chains.

Even scarier, is this poll highlighted by Drudge:
http://tinyurl.com/clintonjoke

Perhaps a sign all of the Conservative Pundits are blowing it completely.

The Clintons tried to Nationalize Health Care, offered endless Deficit Spending schemes, made it their policy to lie about the genocide in Rwanda, appeased in failure North Korea - the Arafats - the Taliban, treated Radical Muslim Militancy as a mere law enforcement issue, destroyed Our economy by undermining the US Mortgage Industry, gave Enron Federal Loan Guarantees - enabling the folly, provided the Gorelick Wall - the Torricelli Intel Reform which made the USA so vulnerable for 9-11, etc.

There is no major problem we face today, which wasn't largely made far worse by the Clinton Negligence, and pure ignoring the responsibility of the POTUS Office.

There is little difference between the narcissism and dysfunctional policies the Democrats provided during the Clinton Era vs. the failure we see today. In fact, Bill went out to lobby for the disastrous Obamacare, and even passed along bribes to Sestak. Hillary gave Pelosi a hug for the disastrous Health Care passage.

Regardless of the horrid Clinton Record, matching the destructive Democratic Partisan pattern of Carter, Obama, Corzine, McGreevy, Gregoire, Granholm, Blanco, etc., the FASHION and perception of many Americans today are seeing the likes of Slick Willy in a very misguided manner. Even after he went out of his way to vilify the Tea Party Movement - offer such ugly racism during that last Democrat Primary, there remains the enabling of the Democratic Partisan folly via mythic, baseless, fantasy.

We better 'change' this mess, do something, before we are all riding in far worse than is pictured in this fun post.