California's Recovery Summer™ Ends With Another Drop in Employment (Psst! Did You Hear Christine O'Donnell Was a High-School Wiccan?)

Shake up the Magic 8 Ball and I'll bet it reads 'All signs point to malaise'.

Last month I suggested that the little hook downward in California employment, reported for July, was a troubling sign. Today, fresh data was released from the State of California, and the downward move has continued... 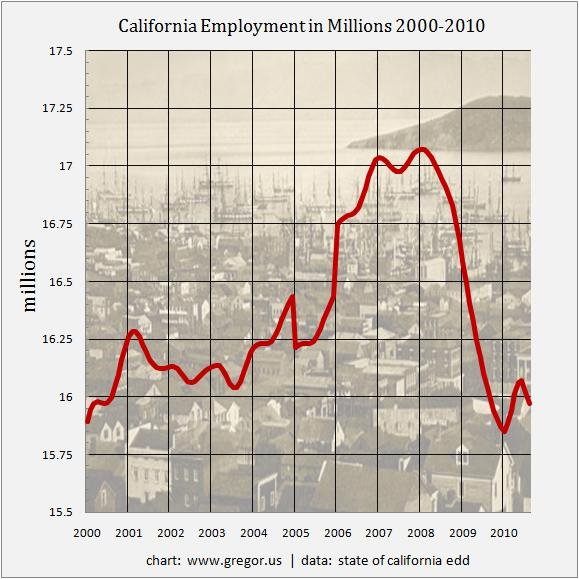 Let’s consider the context here. Lower interest rates and several trillion in monetary and fiscal stimulus over three years has produced, at best, a small but brief cessation of job losses in California, the largest state in the union. As my work here at Gregor.us has also shown, over the past year and a half, California is one of a handful of states that is extremely sensitive to the price of oil. 75 dollar oil is too high for California’s economy, which is massively leveraged to a road and highway transport system that was built out on 12 dollar oil. Meanwhile, a severe debt-deflation remains underway in California as asset values in all real estate continue to fall from highs that will never be seen again–not in real terms, anyway. The headwall to any improvement in job creation largely comes from these two factors. And, helps us make sense of the following fact: in August of 2000 the total number of employed persons in California stood at 15.994 million. And in August 2010? Answer: 15.968 million.

One of the fallacies you will hear in financial media is the idea that flat job growth now means that “at least things are not getting worse.” That’s just not true...

The current chief in Washington reminds me of Jimmy Carter without the killer rabbit.

at 10:50 AM
Email ThisBlogThis!Share to TwitterShare to FacebookShare to Pinterest
Labels: Democrats, Economy, Obama

The headline alone was worth the price of admission! Thanks for the laugh!

No. Oh, all those things are problems, but they don't make a "headwall".

The headwall is the regulatory environment. When you have to have permission from ten bureaucrats to stick a shovel in the ground, you aren't likely to hire ditch-diggers even if you have the money to do it.