Citing rising unemployment and concerns with the nation's morale, Congressional Democrats hosted comedian Steven Colbert in the Capitol Building today to highlight the seriousness of their efforts to right the ship of state. 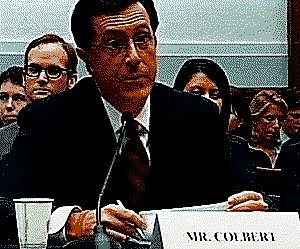 Rep. Steny Hoyer (D-MD) noted that Colbert's testimony before Congress was a huge win for the Democrats stating, "Nothing brings a country together like immigrant jokes delivered in deadpan by Steven Colbert, the nation's best-known comedian who wears glasses and hosts a fake news show patterned after O'Reilly."

"Bringing Colbert in to deliver his incisive commentary demonstrates the seriousness with which we take our work here in Congress.

"Also, remember to try the roast beef special -- and don't forget to tip your waitresses."

Democrat pollsters echoed Hoyer's claim, with reports that the nation's morale had improved over 17.4% after Colbert's humorous foray into Congress. The respected political analysis website 538.com found that five of eight Bethesda, Maryland residents would vote Democrat after watching the funnyman's testimony.

at 11:55 PM
Email ThisBlogThis!Share to TwitterShare to FacebookShare to Pinterest
Labels: Democrats, Pelosi