Barack Chavez Obama doesn't want you watching America's most trusted cable news channel, according to polling by Politico and GWU

Last May, Mark Levin -- the President of Landmark Legal Foundation -- stated that President Barack Obama was the "closest thing to a dictator" this country had ever seen.

The list of horribles included his naked attempts to silence critics, his encouragement of voter intimidation, his support of rampant vote fraud, the implicit campaign to encourage illegal immigration, and his blatant abrogation of contract law (e.g., the GM and Chrysler bailouts).

Now Obama is at it again, demonizing the most popular and trusted cable news outlet in the United States. In an exclusive interview with Rolling Stone Magazine, Obama made the extraordinarily un-presidential claim that Fox is "destructive to [America's] long-term growth."

Consider that a recent Politico-George Washington University poll recently determined that Fox News is trusted by 42% of the American public versus 30% for CNN and a puny 12% for MSNBC. 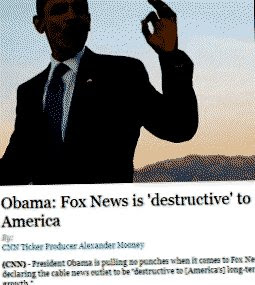 But the new comments from Obama constitute the president's most direct attack yet on the network owned by business mogul Rupert Murdoch.

"But as an economic enterprise, it's been wildly successful. And I suspect that if you ask Mr. Murdoch what his number one concern is, it's that Fox is very successful."

Fox has yet to respond to the president. But during the administration offensive against the network last year, network spokesman Michael Clemente slammed the White House for continuing "to declare war on a news organization instead of focusing on the critical issues that Americans are concerned about."

What the President is saying is simple: you can't be trusted to figure out which news shows are reliable.

Let me repeat: Barack Obama does not trust the American people. He apparently doesn't believe in freedom of speech. Freedom to dissent. Liberty. The First Amendment. Or the American Constitution, best I can tell.

This kind of behavior is beyond the pale. Especially for a man who took a solemn oath to protect and defend the Constitution.


Linked by: Michelle Malkin and Memeorandum. Thanks!
at 6:42 PM
Email ThisBlogThis!Share to TwitterShare to FacebookShare to Pinterest
Labels: Crime, Democrats, extremism, MSM, Obama

Barack the Magic Moooslim, is a soft-dictator. He is an intellectual or more accurately, a pseudo-intellectual. He and his friends think very highly of themselves and they are intending to tell all of us how to live.

Our Marxist-Mooslim Boy in Chief needs to be de-elected ASAP.

Oh my goodness, shades of Atlas Shrugged coming to life. What next, Anti "Dog-eat-dog" legislation?

You know, the first thing I noticed about this article? The hand motion Obama is making in that Getty Images picture at the top of the CNN story. He's actually making the symbol with BOTH hands. It can mean "OK," which is what Obastard is intending.

I prefer to think he's being self-referential.