Some pundits will surmise that Hillary's knives are out for all to see. A few will point to the ongoing feud between Rahmbo and David Axelrod. Al Gore will blame climate change.

But the fact remains: Barack Obama is, as we predicted, monumentally unqualified for the most difficult job in the world. 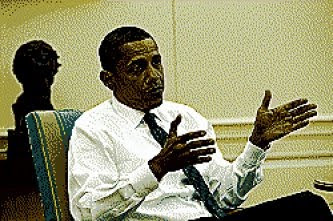 Tensions often turned personal. National security adviser James L. Jones privately referred to Obama's political aides as "the water bugs," the "Politburo," the "Mafia," or the "campaign set." Petraeus, who felt shut out by the new administration, told an aide that he considered the president's senior adviser David Axelrod to be "a complete spin doctor."

During a flight in May, after a glass of wine, Petraeus told his own staffers that the administration was "[expletive] with the wrong guy." Gates was tempted to walk out of an Oval Office meeting after being offended by comments made by deputy national security adviser Thomas E. Donilon about a general not named in the book.

Suspicion lingered among some from the 2008 presidential campaign as well. When Obama floated the idea of naming Clinton to a high-profile post, Axelrod asked him, "How could you trust Hillary?"

A classified exercise in May showed that the government was woefully unprepared to deal with a nuclear terrorist attack in the United States. The scenario involved the detonation of a small, crude nuclear weapon in Indianapolis and the simultaneous threat of a second blast in Los Angeles.

Obama noted that if only Indianapolis had been targeted, "since it's a Red State, I'm not sure anyone notices."

Okay. I made that part up.

Obama has kept in place or expanded 14 intelligence orders, known as findings, issued by his predecessor, George W. Bush. The orders provide the legal basis for the CIA's worldwide covert operations.

The leftists who shrieked more or less continuously for eight years about Bush's usurpation of the Constitution -- rather, the 'Constitutional rights of terrorists' -- were unavailable for comment at press time.

Oh, and thanks, Bobby. We already knew that Barack Obama was the most unprepared, unqualified President in history. Now tell us something we didn't know.

Yo, Woods: it's not like we didn't spend 18 months prior to November 2008 trying to warn you and the rest of the drones.

We can only hope that Woodward will have a similar impact on Obama as he did on Nixon. To me, this stuff makes Watergate look like Boy Scout antics. Yep, Obama is historic alright.

My reaction when I heard of this was similar: thanks for telling us before the election, when it might have done some good, Woodsie.