"I'm grateful that at a difficult time, Hillary changed hair styles, causing legacy media to ignore another of my advisers jumping ship"

It's headline news at all the mainstream rags: Hillary Clinton unveiled a new hairdo just in time to listen to more threats by the hirsute midget dictator Mahmoud Ahmadinejad (that's the description he prefers, I hear). 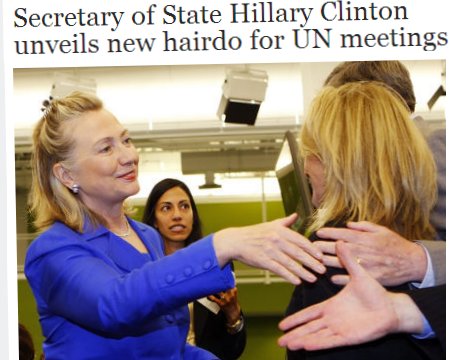 Her efforts bore fruit, as legacy media largely ignored the stunning news that the third of four senior members of the Obama economic team has jumped ship.

Larry Summers follows Peter Orszag and Christina Romer, who earlier left their roles as director of the OMB and head of the Council of Economic Advisers, respectively. 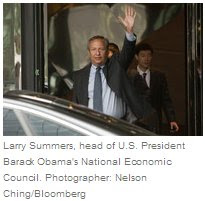 White House officials expect Lawrence Summers to leave his job as the president’s National Economic Council director after November’s congressional elections, according to three people familiar with the matter.

His departure would leave Treasury Secretary Timothy Geithner as the only member of President Barack Obama’s original top-tier economic team. Summers, 55, and the president have discussed his future plans, according to one person.

Administration officials are weighing whether to put a prominent corporate executive in the NEC director’s job to counter criticism that the administration is anti-business, one person familiar with White House discussions said. White House aides are also eager to name a woman to serve in a high-level position, two people said. They also are concerned about finding someone with Summers’ experience and stature, one person said.

Note the emphasis: the White House is interested in finding a woman, as opposed to the most qualified person, irrespective of gender.

Consider: the economy is flat on its back, and the Obama administration is still more interested in playing gender politics than in fixing the economy. It had already cemented a formidable reputation as masters of racial politics.

Turbo Tim Geithner could not be reached for comment as he was trying to save an Excel spreadsheet as a Quicken file.


Update: An anonymous respondent writes, "So they're looking for a female, Ivy League prof with some business experience, who can also suck-up to Obama. Maybe they should break down a few more barriers and nominate a hirsute, transgendered, Ivy League Ec Prof who once advised Enron - Paul Krugman, come on down!"

Hillary is such a dishonest socialist...

She has a history of changing her style and appearance, to overcome her own mistakes. She will hide for awhile, and return to the public stage with a new hairstyle.

After it was revealed she was involved with peddling pardons, new hair style.

After the disastrous 'reset' embarrassment with the Russians, new hair style.

After flopping in the attempt to bring the Olympics to NYC, new hair style.

The list of trying to hide, change identity, is long.

Not just a Female experimenting with her looks, a typical change to create a separation from the enormous errors, corruption, scandal.

Hillary was sought by McCain in the last General Election. Her numbers are simply dreadful as far as a National Candidate - outside the mindless Democratic Partisan devotees.

It is ironic Mrs. Palin's numbers are as poor as Hillary Clintons. They remind one of the dreadful numbers of Mrs. O'Donnell.

If Democratic Partisans are foolish enough to turn to Hillary, who had the same identical platform as Obama - with Bill and Hillary in deep with this Obama - Pelosi - Reid Disaster, they will fall further down.

But then again, if Conservatives turn to the weakest offerings, sacrificing easy Senate Seat pickups with potential Majorities held by Republicans, or even ruin serious Presidential Opportunities due to Fashion - Identity - Image, we can follow the same disastrous path as the opposition. It is clear, the race in Delaware is a prime example for a 'teachable moment'.

No one wants a Castle voting with you 50% of the time, but offering Candidates with the electability and experience level of a disastrous Hillary Clinton on the Conservative side, is as foolish as it gets.

The time for enabling this folly should be over. It would be nice to see the likes of Hillary Clinton out of Public Service for a change.

Hillary is an altogether unattractive woman. Her hairstyle is childish and unprofessional-looking. How on earth will others take her seriously?

@patriotic -
that's our beloved secretary of state you're talking about! the proud steward of the rose law firm records, organizer of the fabulous whitewater real estate development, and eminently qualified to run against barack obama in the 2012 democrat primary!@

Good Lord.. that's what I do with my hair when I'm cleaning the bathroom.

I'd never walk out the door looking like that.

So they're looking for a female, Ivy League prof with some business experience, who can also suck-up to Obama.

Maybe they should break down a few more barriers and nominate a hirsute, transgendered, Ivy League Ec Prof who once advised Enron - Paul Krugman, come on down!!!