The phenomenon known as "Senator Al Franken" may be more explainable than we had originally thought. Writing at the Washington Examiner, Jeff Davis describes the results of research into Minnesota's 2008 election. It would appear that there is overwhelming evidence of vote fraud in volumes previously thought unimaginable. 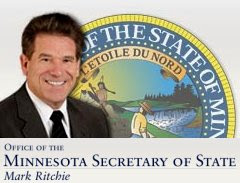 • Double registration: thousands of voters are double-registered and at least a hundred or more are thought to have voted twice in 2008.

• Invalid voter addresses: Nearly 100,000 voter addresses were listed by the USPS as "vacant" or "undeliverable"; the investigation revealed empty lots and non-existent addresses in a spot-check.

• Dead voters: thousands of deceased voters are still on the active voter rolls -- a spot-check showed some had voted after dying. Quite a feat, eh?

• More votes than voters: a check of Ramsey County found that multiple precincts had more ballots cast than registered voters.

• Illegal aliens voting: despite multiple warnings, Minnesota's A.G. had not taken steps in 2008 to ensure that illegal aliens could not cast ballots. After the election, it was discovered that some, in fact, had.

• Illegal destruction of records: at least two counties have destroyed voter verification records though they are legally required to retain them.

Despite this overwhelming evidence, Minnesota officials -- starting with the Secretary of State Mark Ritchie (D) -- claim there is no voter fraud in Minnesota and thus no need for an investigation.

If you want to register your displeasure, Secretary of State Mark Ritchie's contact number is 651-215-1440.

Minnesota's Democrat Attorney General Lori Swanson could also be encouraged to take action. Her number is 651-296-3353.

Be polite but firm: you can tell them that if they do not feel like maintaining the integrity of the ballot box, they are contributing to the destruction of America. Without a legitimate vote, they are helping turn the United States into a third-world country.

But, if that's their aim, tell them they're doing a damn fine job.

I hope there is a special place in hell for anyone -- ANYONE who is involved with rigging elections.

Will have to resort to the inked finger?

he is part of the program developed by George Soros after the 2000 election. They are working to elect state officials in key positions. Washington, Minn., Ohio and a few other states already under their influence. There is no guarantee November will turn out like we think if they can "work" the numbers in close elections.