Sen. Jim DeMint obliterates Mike Castle: 'I was there when we had the numbers, but didn’t have the principles'

In an interview yesterday on The Mark Levin Show, Sen. Jim DeMint (R-SC) vaporized the arguments made by Mike Castle's supporters with a single sentence:

"I was there when we had the numbers, but didn’t have the principles"
There should be no confusion about Constitutional conservatives' support of Castle's nemesis, Christine O'Donnell. 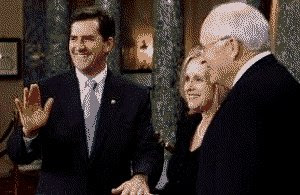 • Mike Castle is a staunch supporter of unions -- especially the SEIU -- and said support only began after copious amounts of union money began flowing into his campaign coffers.

• Mike Castle supported one of the most outrageous violations of the First Amendment -- the DISCLOSE Act -- ever seen in Washington. Its intent -- to baldly suppress conservative speech -- was so obvious that Rep. Hank Johnson (D-GA) stated that without the DISCLOSE Act, "we'll see more Republicans getting elected -- both local, state and federal [sic]."

• Mike Castle does not agree with the Second Amendment, having earned an 'F' from the NRA for his 'lifetime achievements'.

• Mike Castle doesn't believe in free enterprise, having earned a pathetic 43% from the Club for Growth.

• Just like Charlie Crist, Arlen Specter, and other unprincipled candidates, Castle won't rule out a third-party run if he loses the primary. And, like Crist, you can be certain he will shape-shift faster than a character from a Star Wars' cantina.

The times are too perilous to tolerate this kind of behavior when there are alternatives who will support that archaic document called "the Constitution". The squeamish Beltway Republicans may have heard of it.

BootMikeCastle.com's Frank puts a bow on the matter when he states, "Mike Castle is so far left, that if he were to win the GOP primary, his Democrat opponent in the general election would be able to run to the right of Mike Castle."

And that, my friends, is why we support the Constitutional alternative: Christine O'Donnell. And, yes. My prediction is that she can and will win the general election. And it won't be close.

at 6:57 PM
Email ThisBlogThis!Share to TwitterShare to FacebookShare to Pinterest
Labels: Protecting America

if christine had been able to make a case 1/10th as well as you, then she'da had my suport.

This is more PURE FASHIONABLE Sophistry.

DeMINT is one of the biggest 'blow by the winds' players. He doesn't even seem to realize the GOP had a fairly good record during the Bush Administration. Talk about FASHIONABLE SOPHISTRY.

So, the efforts to wage the GWOT, with battles for the liberation of the oppressed in Iraq and Afghanistan were not PRINCIPLED?

The reality is, the record has been so distorted by the FASHION, they are not objective about the former Bush Adminsitration and the Republican Majority from 2002 to 2006.

This is the sophistry of the Hannity effort, who never offered any serious analysis of various Republican Majority - Bush Adminsitration Efforts, being ALL FOR IT - even bragging about it when the Poll Numbers were historically high. Then Hannity and others ran away as fast as they could when the POLL NUMBERS grew low over fears regarding Iraq.

They still have no grasp of objectivity in terms of spending, as they prefer a 'talking point' cliche, instead of serious analysis.

DeMint just repeated talking points of the Hannity folly, which even blew with the winds from many voices of Constitutional Conservatives, Libertarians (some form the left), who were out to debase the GOP after 2004.

It reminds one of the Minute MEN flop all over again. Having some lost in a tunnel of what we call the Conservative ARENA. Hannity is a fashion player, and probably has no clue, he speaks from a smaller group of devotees than he realizes.

WE see it often, a HYPE over substance from many of the Celebrity Elites who have now clue.

Let's just put this in perspective, imagine the deciding MEMBER for the Senate Majority comes down to this Delaware, and we LOSE because of O'Donnell who has no background, substance, and even cannot be honest about record - past.

We better not lose, now that you are going to get O'Donnell in...

And the SLANDER offered by CONSERVATIVES has ruined the credibility of many.

The Democrats are again thrilled, the Conservatives are going to commit suicide.

It is reallly getting disgusting.

The TEA PARTY EXPRESS is becoming a new MAFIA?

Thanks again for the dumbing down of the Conservative Movement FASHIONISTAS.

Conservatives supported Bush 110% on the war on terror and Iraq.

We opposed him on poor decisions like immigration 'reform', Harriet Miers, the expansion of Medicare, etc.

This was not a comprehensive description by DeMint, and his voting record is indicative of that.

SHE NEEDS TO BE AT HER BEST EVER.

I AM PRAYING FOR HER!