Gee, they've been right about so very much. They backed TARP. Barack Obama for President. The Stimulus Package (or, as I like to call it, "Lotto for Unions"). The Omnibus Spending Bill. Deficit spending from here to eternity. Oh, and lookie here: Gitmo's still open; troops are still in Iraq; and MINC actually approved a Bush-style surge in Afghanistan.

Yes, these are real genius prognosticators at work. 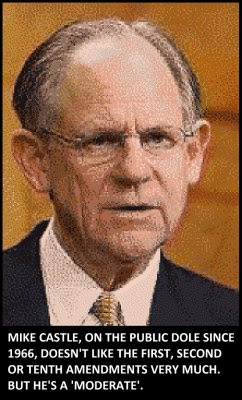 The first race in Delaware, where Christine O’Donnell, a political activist and commentator, is running against Michael N. Castle, who has held elected office in Delaware for 30 years as its governor, lieutenant governor and lone United States representative. The contest originally appeared to be a mismatch...

...Mr. Castle – a moderate who is unambiguously a member of the establishment – was next on their target list. And so Ms. O’Donnell, who already had the support of the Tea Party, last week received endorsements from Republican thought-leaders like Ms. Palin, the National Rifle Association and Senator James DeMint of South Carolina.

In contrast to Alaska, however, where Mr. Miller is the favorite to be elected unless Ms. Murkowski finds her way onto the ballot as a Libertarian or write-in candidate, Delaware is a blue state, and the electoral prospects of Mr. Castle and Ms. O’Donnell there are wildly divergent. Whereas Mr. Castle is nearly a 95 percent favorite against the Democratic nominee, Chris Coons, according to last week’s FiveThirtyEight forecasting model, Ms. O’Donnell would have just a 17 percent chance of winning a race against Mr. Coons.

I've said it before and I'll say it again. If we have a GOP with more Mike Castles in it -- that can't agree on unimportant principles like the DISCLOSE Act (it's only the First Freaking Amendment) -- I'd just as soon have one less Senator.

But Silver and Scher are wrong about pretty much everything, so I strongly suspect that should Christine O'Donnell pull the upset, she'll have an excellent chance of edging her Democrat challenger.

By the way, Nate -- I'm still waiting for my apology from you and Keefus ("Sunday NFL Games Are Watchable Now") Olbermann over Dealergate. After all, Obama's "Car Czar" has admitted that politics played directly into decisions over which facilities were closed.

But I understand your dilemma: you're wrong about so very much -- where would you begin your apology tour?

[blah blah blah] then I'd just as soon have one less Senator.

neither would dick armey and many others.

oh: i am still waiting to hear one outstanding thing about odonnell.

why shoud i want her to be senator, not why she's to the right of castle.

if she was running against you, then i'd vote for you. ypour cv is better than hers. you haven't been caught lying over and over.

and i don't think you'd do as poorly as she did on cavuto.

can you send me a youtube link that shows her giving a great speech or handling questions well, please?

there shouhd be at least one by now, don't you think?

Again, I'll ask the same question of Castle. What has he done that, besides mysteriously amass $5 to $8 million while being on the public dole?

Castle's record, based on the DISCLOSE vote alone, is completely unacceptable.

This multi-thread exchange has been very interesting to follow, as have been the divisions which have resulted from this discussion across the conservative pol/pundit range. All of this is ultimately a result of the Tea Party Movement and proves to me two things:

1) No third party is needed.
2) The Republican Party needed this movement to realign their priorities.

From establishment Republicans to grassroots up-and-comers; from establishment pundits to the bloggy goodness of the interweb, sides are being taken, opinions are being voiced and a serious discussion has been engaged about conservative values and policy. When someone like Charles Krauthammer takes the position that endorsements of O’Donnell by the likes of Palin and DeMint are “irresponsible” (wow), “destructive” (WOW), and “capricious” (WOW!), I take real notice.

Great arguments about conservative politics are solidifying, and I would hope that the Republican Party takes note and realizes that if they don’t pay attention, they will have to contend with that aforementioned unnecessary third party. When it comes down to it, the establishment fears that a move to the right will alienate voters in the long run. This is politics over policy, and is why I think the likes of Reliapundit and Krauthammer are wrong on this.

If the Republican Party is to represent a conservative voting bloc, then a Republican Senator should not be voting for DISCLOSE. Period. Before a single glance at O’Donnell’s bona fides, I would contend that Castle needs to be retired – by Mickey Mouse if need-be. As has been put to print in a myriad of places, the question really does come down to whether Republicans want 30 Marco Rubios or 60 Arlen Specters.

Gonna have to go with Doug on this one.

What good is a Republican in office if they will peel off from the values of the party should the political favors tilt their direction?

there is much good that can come with a senate majority even if some of the gop-ers are snowe, collins, brown, mccain and castle.

M. Malkin has a great list of Castle's "conservative" voting record, the only reason I have heard justifing voting for him is that his term would start the day he is elected and that means that he "might" stymie the lame duck cram down of card check....

With his pathetic voting record, he will jump ship and vote CC anyway.....

Good luck to her and regardless the GOP-SC better get behind the winner....

Not sure how much more good we can take, sir.