Trumka: Democrats Better Jam Through the Forced Unionization Act of 2010 (aka Card Check) in the Lame-Duck Session -- or Else

Considering that out-of-control union bosses have bankrupted GM, Chrysler and nearly every municipality and state in the country, Democrats running for office can't be too pleased with Richard Trumka's latest pronouncement.

In an online chat on Thursday, the AFL-CIO President bragged that the Employee Free Choice Act was not only on the table, but he strongly implied that the lame duck session would be used to jam it down the throats of the American people. After all, they've already got used to the taste of s*** legislation.

It’s hard to imagine, but AFL-CIO President Richard Trumka continues to claim that there will be action on the Employee Free Choice Act... in an online chat Thursday, he used the phrase, "before the end of the year." A reference to a lame-duck push? 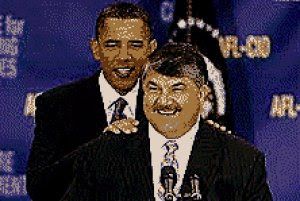 In response to a question from Marti in California about the Employee Free Choice Act, Trumka said:

There is no question the Employee Free Choice Act has to become law and workers need it. EFCA is necessary so more people can get bargaining power and we can get fair share of the economic pie.

• "No matter what the outcome of the Nov. 2 election, will you commit to voting against the Employee Free Choice Act or any other similar expansion of labor union power in a lame-duck session of Congress?"

• and "...or any other similar expansion?" (e.g., through binding arbitration or other partial Card Check measures).

Considering that the Democrats have lied repeatedly -- about health care reform, the effects of the Stimulus package, Cash-for-Clunkers, HAMP, and virtually every other component of their failed agenda, I think Shop Floor is engaging in some wishful thinking in believing they'd live up to any promise.

Come hell or high water, though, Democrats will be walking the plank in November.

Gee, but I thought there was a war in the Republican Party?