Another Proud First for the Obama Administration: U.S. Diplomats Forced to Respectfully Listen to Ahmadinejad's Hateful Screeds at the UN

Unsatisfied with a mere series of bows, the Obama White House has decided to truly humiliate the United States. The administration apparently instructed U.S. diplomats to respectfully listen in as the insane, Hitler-esque despot threatened America with a war 'without boundaries'. 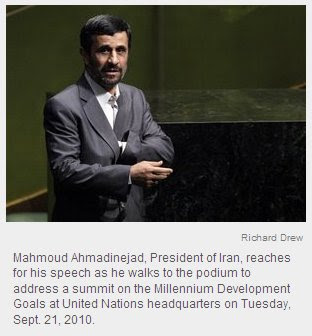 Iranian President Mahmoud Ahmedinejad warned the Obama administration today that if Iran's nuclear facilities are attacked, the U.S. will face a war that "would know no boundaries..."

...He said that Iran is on the brink of becoming a nuclear power, and warned Israel and the U.S. against attacking its nuclear facilities.

Asked about the possibility of a U.S.-supported Israeli air strike against Iran, the fiery Iranian leader said an attack would be considered an act of war, and suggested the U.S. is unprepared for the consequences...

...Such a war "would know no boundaries," Ahmedinejad said. "War is not just bombs."

...[he also] raised questions about the Holocaust that have marked his tenure as president...

For the first time, U.S. officials did not walk out during Ahmadinejad's address.

Each year prior to this one, diplomats had trouped out before having to listen to the maniacal torturer who enjoys stoning women, lynching homosexuals and performing other unspeakable acts.

Ahmadinejad also blamed capitalism for all of the world's ills, which perhaps explains why the White House ordered the attentive audience.

You know you have problems when Canada walks out on the guy for being a nutjob dictator and "the O" has his team stay to take notes.

I've never quite figured-out how some of these guys don't have "accidents" on the way to the UN to speak...just sayin'...it could happen.

Jet engines have critical part failures all the time.