Well, at the end of Recovery Summer™, the house is boarded up. The doors. The windows. Everything. We're at the Comfort Inn. Room 112.

By an 8 point margin, independents who voted for Obama oppose his tax hikes 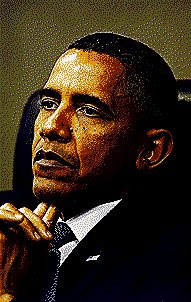 The [Center for Data Analysis] found that the Obama tax hikes would:

• Raise taxes on the 55% of all joint filers earning more than $250,000 who run small businesses that employ others.

Now that's the kind of change you can feel in your nether regions!

Certainly, America's business leaders are feeling more comfortable with the Obama administration as...

...for the week ended September 17, corporate insiders bought $1.4MM in shares in a whopping 7 different companies. This was just marginally offset by sales of $441MM in 98 different companies, a ratio of 290 to 1 of stock notional sold to bought. But wait: this is GREAT NEWS: last week the ratio was 650 to 1! So this is a huge improvement and certainly yet another reason for today's rally... for those wondering just who is orchestrating today's move higher, please let us know if you find out.

And last but not least:

It would appear that certain foreclosures by major, major institutions may have been fraudulent... and, thus, invalid, which could really, really screw things up

...At least one (and perhaps more) "inside officers" in various law firms filed thousands (and maybe tens of thousands) of affidavits they did not read and thus could not have attested to.

...This practice appears to not be limited to one law firm. In fact, it may be basically the entire "foreclosure industry" that was involved in this.

...This is likely to derail many foreclosures - at least from a standpoint of time. It may also void some of them and force them to be re-litigated. This will have a SEVERE impact on loss severities - at minimum....

...If the time has passed to be able to make reasonable corrections to these so-called "ministerial errors" (and it probably has) then the impact on MBS holders who happen to have the "hot potato" in non-agency securitizations could be catastrophic...

In plain English, some reports indicate that thousands of foreclosures could have been performed without the appropriate documentation. Which could make them, ehm, invalid.

Which would make some of the investment vehicles derived thereof (like mortgage-backed securities or MBS), ehm, difficult to value.

Hmmmm. Now how about step two? My daughter and SIL bought a bank owned house. They've been in it for about 2 years now, but ... suppose people get aware of this situation and challenge the repo action by the bank from which they bought the house? (or any other bank owned house)

I can see possibilities for this whole thing getting _really_ messy...!