The final chapter for Communism in the Caribbean is about to be written. The Miami New Times reports that Fidel Castro wasn't joking when he renounced his life's work of communism, poverty and misery. 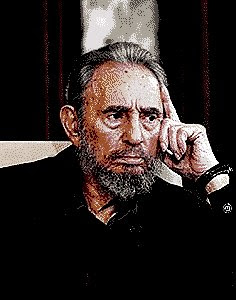 Fidel Castro now claims that his statement claiming that the Cuban model of communism no longer works was misinterpreted and taken out of context by an American journalist, but actions speak louder and words as the island nation has announced a major layoff of state workers. At least 500,000 workers will lose their state jobs in the next six months. That means just under five percent of Cuba's total population and 10 percent of the work force will be out a of a job, but the government plans to grow the private sector to replace the jobs.

Raul Castro promised to cut 1 million jobs over the next five years in August, but surprisingly sped up the process by announcing that more than half of those jobs will be axed in the next six months.

"Our state cannot and should not continue maintaining companies, productive entities and services with inflated payrolls and losses that damage our economy and result counterproductive, create bad habits and distort workers' conduct," the CTC, Cuba's official labor union, said to the government press.

Cuba has labor unions? Who are they protecting the workers against?

...The news is the latest in small but significant developments signaling that Cuba is now more than ever willing to experiment with some characteristics of capitalism.

Would that the White House embrace the same experiment.

Of course, history, facts, logic, reason and human experience mean nothing to the current administration, which is wedded to an ideology that has failed in every time and every place it's been tried.

For your interest, you may wish to contrast these two articles about Fidel Castro and his outlook on Jews:
http://www.brookesnews.com/062310castro.html