That unspoken rule about never speaking ill of America while on foreign soil was eradicated long ago by the MoveOn Democrats. Interviewed by Der Spiegel, Rep. John Lewis (D-GA) pulled out the frayed, oft-used race card to explain America's opposition to the Marxist policies of Barack Obama.

SPIEGEL: But that's what we've had for the last two years, and it hasn't worked out well. If anything, the political tone in Washington has gotten worse. 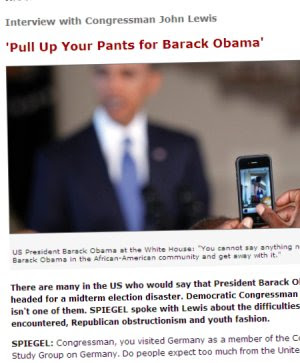 SPIEGEL: Of course not. But the question is whether Washington would function better if the Republicans had a majority in either the Senate or the House. Would that not make them less inclined to be obstructionist?

Lewis: No. I think the Republican Party is going to the extreme. If it continues on the path it's on, it will continue to be a minority party for many years to come.

Lewis: The black masses in America love Barack Obama. Black candidates and black Members of Congress would love to have Barack Obama come and campaign for them. I wish I could get him to come down to Georgia to campaign for me, but he thinks my seat is safe. He is very popular. You cannot say anything negative about Barack Obama in the African-American community and get away with it.

...SPIEGEL: The radicalization of the right, in other words, isn't necessarily due to the US having a black president for the first time ever?

Lewis: In some quarters, it's true, people cannot get used to the idea that a person of color is president of the United States. People cannot get comfortable with the idea that so many people are coming from different parts of the world to America. In just a short time, America will be a minority majority, and that feeds some of the frustration.

You see, John, you may be a touch senile, but we opposed HillaryCare. Not because Hillary's a woman -- though I'm sure you'd like to play the gender card -- but because it sucked.

We believe in history, facts, logic and reason -- the distillation of which is the Constitution. Perhaps you've heard of it.

Oh, and that race card? It appears to have seen better days.


Related: Timeline: Anatomy of a Tea Party Smear by the Democrat-Media Complex.

Wonderful article,thanks for putting this together! "This is obviously one great post. Thanks for the valuable information and insights you have so provided here. Keep it up!"

It’s the first time in the history of the country that we have a black president. You have to understand that there are some people in our society that say he is not one of us.

Bigot. Maybe it's because he sucks.