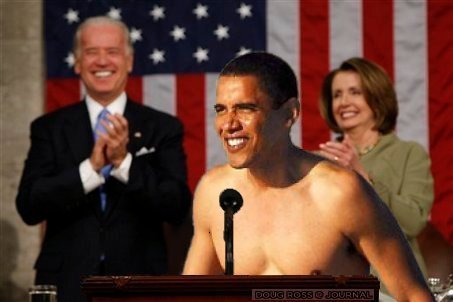 I'd like to welcome the new Tea-Baggers and pray for the recovery of Gabby Giffords, wounded in a tragic attack by right-wing conservatives and/or Sarah Palin.

Look, it's no secret that I'm a Marxist. Look it up. Textbook definition. But I realize now, having withstood a massive repudiation in the midterm elections, that I'm going to have to pretend to be a centrist again. Let's all relive the glory days of my 2008 campaign when a snappy logo, a compliant media and an amorphous slogan -- Change! -- catapulted me to my first real job.

Look at all the progress we've made in saving the economy from the worst crisis since the Great Plague:

We passed a historic health care bill that no one read and fewer understand. Over at the EPA, we're using a leaf-blower to dispense new regulations and set industrial policy. We've issued oil drilling moratoriums. passed a financial reform bill that didn't address Fannie Mae or Freddie Mac. Took over the student loan business and two failed auto companies. Blew out a trillion-dollar stimulus package that kept the public sector union bosses in clover.

It's steps like these that have kept unemployment well below 20 percent!

Many people watching tonight remember a time when finding a good job meant showing up at Bill Ayers' house for a fundraiser -- or teaching ACORN hacks how to intimidate businesses. But the world has changed: more people frown on domestic terrorism and rampant vote fraud than in the old days.

And the world operates faster now: China and India are moving towards capitalism, which gives us the opportunity to redistribute our wealth to them. See, we tilt towards a command-and-control economy, impoverish ourselves, which means we use less of the world's resources. Which is more fair.

Education -- but no charter schools. Charter schools are the work of Satan. We want to prepare 100,000 new Democrat voters, I mean public school teachers, in the fields of, ahhh, whatever.

Education -- but don't worry about single-parent families. More welfare, more food stamps, more government subsidies for single Moms... 'cuz it's worked out so well over the past 50 years.

Now, listen carefully. I'm a centrist. Promise. Because I'm about to use the phrase... ... ... illegal immigration. Among Democrats, that's a no-no. We like to call illegals undocumented workers. Or, among ourselves, undocumented Democrats.

That's why we have to build stuff, you know -- towns and roads and stuff. Oh and railroads. Lots of railroads, 'cuz we've got to use less resources which means traveling together like the folks in China and India do. We'll call it 'high-speed rail' 'cuz it sounds cooler.

To streamline business, I've ordered a cursory review of government regulations, while -- behind the scenes -- I've got the EPA pumping out enough new regs to blow your frickin' mind, man! 'Cuz I'm a centrist!

Now, hahahahahahahahahahahahaha, I've heard tell that some are a mite concerned about Obamacare. If you have any issues or ideas for improving it, we'll air 'em on C-Span so the whole American public can see 'em. For five whole days before we vote. It'll be awesome.

And we have to freeze spending, right where it is. Even though that means we're spending roughly 48% more each year than we take in. 'Cuz I'm a centrist.

It means we'll have to reduce health care costs like Medicare and Medicaid and that new, unsustainable health care takeover we just passed. To do so we'll have to centralize all decision-making in a streamlined, efficient government bureaucracy consisting of 135 agencies, offices and bureaus. Lean and mean, baby, lean and mean.

And we've got to talk about Social Security. Not do anything, hell no! Look what happened to Bush after he tried to work on it! Now, if we could just get our hands on all of those IRAs and 401(k) plans... we could guarantee every American a retirement income for life. We'd put it away, stash it in a foolproof lock-box. A vault. Locked away, safe and sound. Oh -- and we'll tax the hell out of the rich, 'cuz I'm a centrist.

In the coming months, we'll develop a proposal to merge, consolidate, and reorganize the federal government in such a way that we'll preserve all of those bureaucrats who vote Democrat every election, but will look like we're more efficient because we'll be regulating even more than we do today.

And thanks to our tough foreign policies, Iran's poised to get nukes, North Korea's nutcase dictator is sinking South Korean ships, Hezbollah's taking over Lebanon, China's launched its new stealth fighter with stolen technology, Russia's got a new czar, and pretty much everyone is laughing at us. Except the Zionists. They're not laughing, believe you me.

Constitution. Founding Fathers. Blah blah blah. Centrist. Look at my watch. You're mesmerized. You're falling into a deep, deep sleep. Repeat after me: I'm a centrist. Cen... trist.


Linked by: Michelle Malkin and RightNetwork. Thanks!
at 9:30 PM
Email ThisBlogThis!Share to TwitterShare to FacebookShare to Pinterest
Labels: Democrats, Obama

Tee to the Hee

Bonfire of the Idiocies said...

That's what I thought he said.