Let's just say that this pic doesn't give me warm fuzzies about the future of the country or the region. 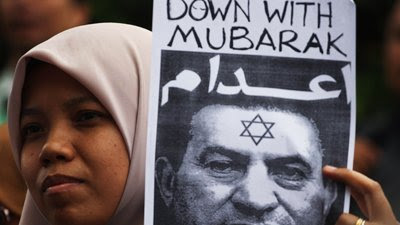 It certainly didn't take long for the Islamists to use Israel as a scapegoat for Mubarak's pathetic regime.

In truth, the Muslim Brotherhood is positioning the weak-willed Muhammad ElBaradei as a puppet president who they will control. Ambassador John Bolton says that ElBaradei is a joke on the Arab street; the only folks who take him seriously are the likes of Christiane Amanpour and the typical cadre of dupes in legacy media.

The Muslim Brotherhood has a long history of support for terrorism -- and even sided with the Third Reich during World War II, drawing "symbolism, terminology, and political priorities [from] Nazi fascism." 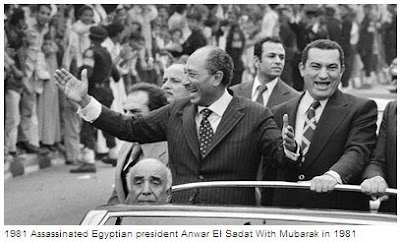 And to illustrate precisely how feckless the Obama administration has been during this Carter-esque debacle, Sky News reports this comforting news.

Washington has been taken by surprise with the speed of events in Egypt, it was only a few days ago that Mrs Clinton said the government there was 'stable'.

I'm not sure who said it but they were right: we've finally located Jimmy Carter's long-lost second term.