Isn't it curious how -- after all of their social engineering programs and union payoffs have collapsed into bankruptcy -- Democrats at the state level have begun to wake up, sounding a lot like members of the Tea Party? Exhibit A: New York Governor Andrew Cuomo: 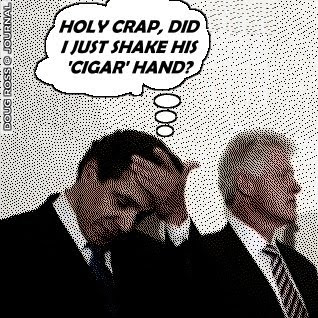 This is a time of crisis for our state... We have the worst business tax climate in the nation, period. Our taxes are 66% higher than the national average... The State of New York spends too much money, it is that blunt and it is that simple...

...most damaging, our expenses in this state far exceed revenue [and this year we face a] very large deficit about $10 billion ... Next year, the problem goes to $14 billion. The year after, the deficit goes to $17 billion...

...We have to hold the line on taxes for now and reduce taxes in the future. New York has no future as the tax capital of the nation. Our young people will not stay. Our business will not come...

Andrew Cuomo is a true far Left progressive. Yet even he has given up on the progressive agenda. California's Jerry Brown, himself such a radical progressive that his nickname is 'Moonbeam', is now recommending $12.5 billion in spending cuts next year (hint: it's not nearly enough).

Yet still Barack Obama refuses to cut. He organized a deficit commission and then promptly ignored its recommendations. The country is monetizing its own debt at a frightening clip, yet Obama's spending agenda persists. Republicans proposed a return to 2006 spending levels -- and Obama can't find anything to cut, despite adding $5.2 trillion in new deficits since Democrats took control of the purse-strings.

Even the hard-core Leftists in power -- like Cuomo and Brown -- have given up on their failed and unsustainable social engineering programs. All of them are cutting spending, enacting austerity measures, and trying to wrestle deficits to the ground.

All of them that is, except for President Obama, who seems bound and determined to Cloward-Pivenize the United States.