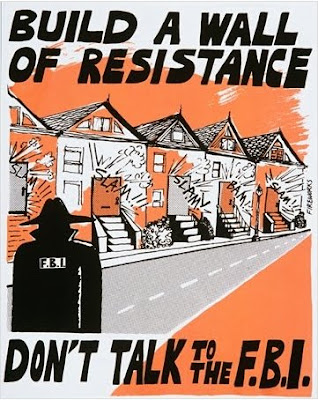 The Council on American-Islamic Relations (CAIR) is an interesting group. It purports to speak for mainstream Muslim Americans, yet the group and its leaders have been tied repeatedly to radicals and extremists.

Less than two years ago the FBI severed its ties with CAIR "amid mounting concern about the Muslim advocacy group's roots in a Hamas-support network."

CAIR and its chairman emeritus, Omar Ahmad, were named un-indicted co-conspirators in the HLF case. Both Ahmad and CAIR's current national executive director, Nihad Awad, were revealed on government wiretaps as having been active participants in early Hamas-related organizational meetings in the United States. During testimony, FBI agent Lara Burns described CAIR as a front organization.

Hamas is a US-designated foreign terrorist organization, and it's been illegal since 1995 to provide support to it within the United States.

Amidst all of these troubling activities, CAIR maintains that it is simply misunderstood. It claims to be the the country's largest Islamic 'civil liberties group' and works 'to promote a positive image of Islam and Muslims in America.'

Yet on February 9th in Oakland it plans on hosting an event that celebrates tolerance for people of all religions and equal rights for women how to respond to FBI raids.

On September 24th, 2010, the FBI raided the homes and offices of anti-war and international solidarity activists in Chicago and Minneapolis. During the raids, the FBI took computers, cell phones, documents and personal family items. In total, 14 activists in Minnesota, Illinois, and Michigan were subpoenaed to appear before a Grand Jury on that date. Since then, 9 other activists have been subpoenaed, 6 of them Palestinian activists. This type of investigation is a tool to repress our movements for social justice and divide our communities.

The 23 activists have all refused to testify in this Grand Jury investigation. 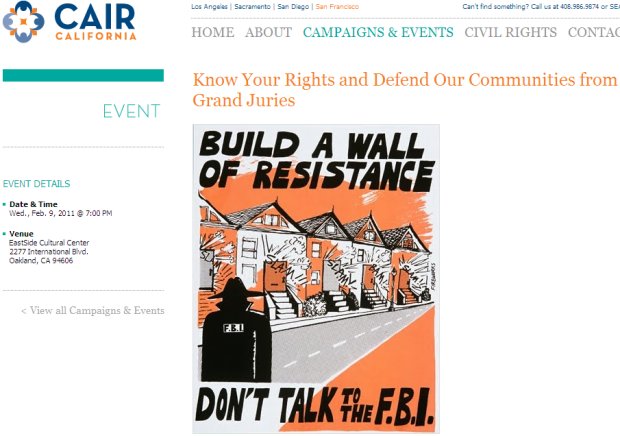 Join us to get the facts on Grand Juries, know your legal rights with the FBI, understand why this is happening now, and learn how our communities can respond!

HATEM ABUDAYYEH, an activist and Palestinian community leader whose home was raided by the FBI on September 24th. Hatem will speak about the investigation, his experiences, and current political organizing.

It certainly sounds like they're all innocent of any wrongdoing, seeing as how they're refusing to testify.

Abudayyeh -- whose first name seems apropos, all things considered -- is an executive director of the Arab American Action Network and an "advocate for immigrant rights." ABC reported that the FBI raids sought information that would tie Abudayyeh to the radical terror group Hamas.

This would be entirely consistent for those affiliated with CAIR, as has been copiously documented by a multitude of sources.

Everyone with half a brain knows precisely what CAIR is. And this kind of event is just icing on the cake.

While "everyone knows what kind of group" CAIR is, our elected officials seem to have either forgotten, or simply don't care (no pun intended). I fear it's the latter.

Every time there is any question about the motivations of CAIR, or its supporters, local politicians seem to knock themselves over in either apologizing, or else kowtowing in other ways at CAIR's feet.

As my friend likes to say, "this sh*t has got to stop!"

To some Americans, the Fourth and Fifth Amendments mean something.