Snooki Pelosi: Before Having Her Nose, Chin and Cheeks Done, Nancy Pelosi Once Partied with JFK [Photo]

Is it just me, or does the young Nancy Pelosi -- prior to having all of her new components added -- resemble Jersey Shore's Snooki?

Somehow she manages to keep her eyes on the camera, even as the handsome new President John F Kennedy beams a megawatt smile down at her... This image shows House Minority Speaker Nancy Pelosi as a blushing young girl with the man whose presidency - and horrifying assassination - would fascinate America for the next 50 years. 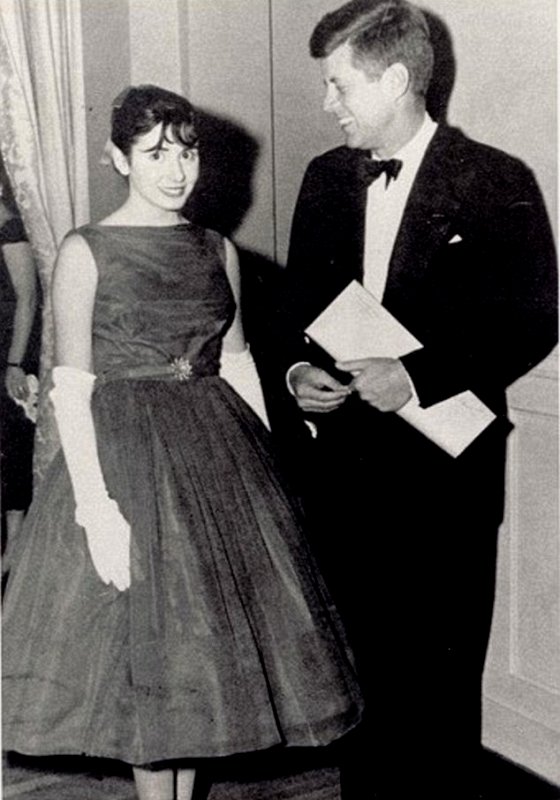 Mrs Pelosi posted the image, which she did not date or describe, on her Facebook wall yesterday to mark the 50th anniversary of JFK's inauguration...

She captioned it: "50 years ago today, I was a young Trinity College student standing outside in the sunlit cold, listening to a young President’s inaugural call to 'the energy, the faith, the devotion...that will light our country and all who serve it – and the glow from that fire can truly light the world."

'The leadership of President John F. Kennedy is not just a memory, but a living force that still asks every citizen to lead—and perhaps that is the most precious gift of all.'

Sorry, hon -- JFK was a defense hawk and tax-cutter. He wouldn't even recognize the modern Democrat Party, which is in the process of bankrupting America using a game-plan designed by Professors Cloward and Piven.

Here's a caption for that pic, Douglas (from Call me Lennie)

"Err, what ahh .. are you drinking Miss Pelosi

I'll have a vinegar and water, Mr President .. if you got it

what would drive a nice looking young girl to Frankenstein facial surgery? Maybe it was jfk's idea.

She sure as hell is ugly now!