Oh. No. He. Didn't. Chris Matthews blames the Tucson shootings on... the strident tone of Mark Levin's voice

Not that you needed more proof that Chris Matthews has lost all command of his faculties, but tonight's diatribe should confirm what we all knew. The Tingle-Master -- which is the term he prefers, I hear -- assailed constitutional attorney and radio host Mark Levin this evening in what must be an all-time record for IQ mismatch. I liken it to a toy poodle attempting to mount Marmaduke.

Chris Matthews, joined by two liberal talk radio hosts on Tuesday's Hardball, essentially blamed...Mark Levin for creating the climate of hate that led to the shooting of Gabrielle Giffords as the envious MSNBC host proclaimed: "People like Mark Levin...every time you listen to them are furious, furious at the left with anger that's just builds and builds in their voice and by the time they go to commercial, they're just in some rage, every night, with ugly talk....They must have an audience. I looked at the numbers today. They have big audiences! And I guess that's the question. Why and is it ever going to stop if it keeps working?" 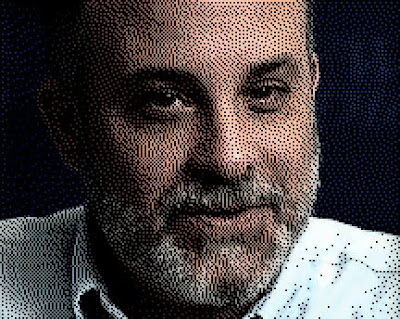 E. Steven Collins, another Philly area talker, sided with Arizona Sheriff Clarence Dupnik who attacked Rush Limbaugh, as he hailed: "The sheriff is Tucson was absolutely right...It does impact people who may have a mental problem or may not" and added that there was a "direct relationship" with Sarah Palin putting crosshairs on her Web site over Giffords' district and the loss of a life of "that little girl who went down to meet the congressperson."

Levin is a man who is passionate about what he believes. Since he was a teenager he has revered the Declaration of Independence, the Constitution and the rule of law, all of which combine to protect the civil society and the precious country that liberals take for granted.

Levin served for eight years in the Reagan administration including stints in the Department of Justice and the Department of the Interior. Today, in addition to his talk show host duties, he provides pro bono legal services as president of Landmark Legal Foundation.

Furthermore, Levin is a man who explicitly decries violence and brooks no such talk on his show. He is a man who, on a nightly basis, discusses history, philosophy, logic and reason. Listen to one of his shows and there is a good chance you will hear him recite accounts of the first Tea Party of 1773, Paul Revere's ride, or the historic passage of the Civil Rights Act of 1964.

Levin often opines on the Framers' intent for the Constitution's Commerce clause, based upon his extensive readings of the Federalist Papers. He has described the founders' reliance upon Montesquieu's separation of powers, John Locke's concepts of natural, God-granted rights, the power of the free market as expressed through Adam Smith's 'invisible hand', and de Tocqueville's immortal Democracy in America.

Therefore Chris Matthews has discarded -- or worse, never bothered to listen to -- the content of Levin's commentary and instead assails the tone of his voice.

Yes, you heard me: MSNBC's Chris Matthews is attacking the tone of Mark Levin's voice.

Which describes, in a sentence, the depths to which the modern Left has descended.

For it is they who market divisive and destructive rhetoric. It is they that advocate lawless behavior. And it is they who reject the Constitution and the Bill of Rights.

Which is why they grabbed this opportunity by the throat: to suppress the free speech of those with whom they disagree.

I do admit that Levin's ranting style is a bit offputting even as the content is well-chosen and to topical.

Matthews I can't stand, neither for his style nor for his content (or lack thereof.)

Are you certain you mean Mark Levine, and not Michael Savage? They have roughly the same political viewpoints, but personally, I've listened to Mark Levine many times and don't recall him "ranting". Michael Savage, on the other hand, I find unacceptable due to his rants.

Video of an ABC interview with Loughner's friend Zach Osler indicates he was driven by a movie titled "Zeitgeist". Osler says it "had a profound impact upon Jared Loughner's mindset, and how he views the world that he lives in".

Zeitgeist can be viewed at http://www.youtube.com/watch?v=guXirzknYYE, at least until they take it down.

At 11 minutes the movie excerpts George Carlin's famous rant against religion, and Wikipedia states the movie advocates the "Christ as myth" theory. Loughner's Youtube video states "No! I won't trust in God!" This is completely consistent with Maher's view of religion.

Osler also says Loughner used salvia. A Johns Hopkins study found that "the subjects described leaving this reality completely and going to other worlds or dimensions and interacting with entities...These are very powerful, very intense experiences....Many people take it once, and it produces such profound dysphoria that they don’t want to do it again”. Wikipedia defines dysphoria as opposite of euphoria, including sadness, anxiety, irritability or restlessness. Maher is also an advocate of recreational drug use, and characterizes it as a victimless crime.

So is Maher really to blame? Of course not. But his philosophy is more consistent with Loughner's than Palin's is. So Maher and his atheist, drug advocating friends had better be very careful about the stones they throw.

I'm sure that I'm referring to Mark Levin.

When I write "ranting" I mean yelling and screaming on-air. Not that he doesn't have good reasons. Just not my style.

Mike Savage is even worst.