Liberals: Democrat Party will split if Obama tries to prevent the collapse of the entitlement Ponzi schemes

The Soros-controlled, far left wing of the Democrat Party is warning President Obama against trying to save Social Security. 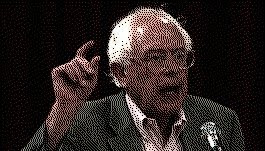 The battle lines are forming within the Democratic Party over the charged question of reforming Social Security in the days leading up to President Obama’s State of the Union address.

Liberals, such as Sen. Bernie Sanders (I-Vt.), and labor unions, such as the AFL-CIO, AFSCME and SEIU, have taken a firm stand against cutting Social Security benefits... They are still reeling over the deal Obama struck with Senate Republican Leader Mitch McConnell (R-Ky.) in December to extend almost all of the Bush tax cuts and chop the Social Security payroll tax for one year by 2 percentage points.

Back in the little land we like to call Reality, a Mish reader created several sobering graphs that represent the impending collapse of the Social Democrat schemes that would make Bernard Madoff blush.

Here is a chart I created using budget projections from the CBO. The main point is from now until 2020, we could eliminate 100% of all federal non-defense discretionary expenditures and still run a deficit.

I went back to the data after getting into one too many arguments with people who claim that we can solve our budgetary problems by eliminating government "waste" - the programs that study the sex lives of jellyfish and that sort of thing - without real cuts in entitlement programs.

Unless the Budget Fairy waves her magic wand, it's not going to happen.

The Democrats' Utopian schemes are imploding as we speak -- in California, Illinois and New York. And, soon, coming to a Social Security and Medicare recipient near you.

All over the world, the Fabian Socialist welfare states are collapsing.

And despite all this, despite history, facts, logic and reason all aligned against their agenda, the Obama Democrats press on, hastening the collapse of an economic system they view as 'unfair'.

Bernie Sanders has nothing to worry about.

Now this is fascinating. Given that the recent polls show amazing unanimity (>70%) on deficit reduction by spending cuts only and against raising the debt ceiling by another dollar, entitlement reform is a foregone conclusion. It would seem that the only question is how long it takes for the far left - most, but not all of the Dem. Party - to fall on their sword on this issue before the public.

I said about a year ago that the election of Obama would mark the high water mark of the far left agenda, as well as for the race card and affirmative action. I think my prediction will yet be proven true.

Wow. Actual data! Social Security is actually sound. Look at your second graph. Medicare is an obvious problem largely because of inflation in healthcare costs. Recall that in 2000 we had a balanced budget. Steep tax cuts, the post-9/11 recession and invasion/occupation expenses produced a long line of yearly deficits. The Great Recession starting in 2007 drastically reduced revenues (see your graph). As the economy recovers, we raise taxes to pre-Bush days and manage healthcare costs we will handle our deficits and national debt long term. There is no reason to panic.