Have you noticed that when President Obama goes off his prepared remarks, things get decidedly... bizarre? The CINC's press conference with China's President Hu was just such an event. His prepared remarks, delivered courtesy of TOTUS, were measured and reasonable. But once off-the-cuff questions were entertained from the press, things got downright weird:

And it’s more likely to come — if China feels secure and itself is doing well economically, they’re more likely to be an effective partner with us on the world stage.

In short, a despotic regime -- that enslaves huge portions of its population, crushes the practice of religions, emits monstrous amounts of pollution, and is dramatically expanding its military reach and power with the United States as its obvious, ultimate aim -- is "good for the world".

In the mean time, the Obama White House is doing its best to weaken our country, following the game-plan of the Clinton administration. While leaf-blowing trillions of dollars on every social program imaginable, it has slashed NASA's budget, drastically cut the defense budget, and restricted access to our own energy supplies for reasons bordering on the suicidal. 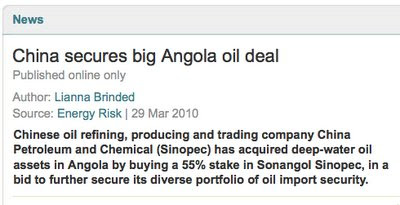 Locking up energy supplies around the world, while Democrats strangle America's lifeblood.

But they're doing it -- they tell us -- for the children.

As for the bag our children will be left holding by this destructive crew? I'll leave the contents of it up to your imagination.

Has the current occupant of the White house given China the rights to drill for Oil in our country yet?
Or does that depend on the re-election campain contribution for 2012.
There got to be a reason that he saves Americas resources for someone, right? Right?