At Reuters, Felix Salmon observes that The Economist has weighed in on the political football called 'raising the debt ceiling' with a decidedly unique view.

The US won’t default, even if the debt ceiling stays

Greg Ip makes a very important point today, which I haven’t seen made anywhere else*: even if the US debt ceiling isn’t lifted, that doesn’t mean the government will default.

In any given month, the government’s income dwarfs its debt-service obligations, which means that the government could simply pay all interest on Treasury bonds out of its cashflow. Greg hasn’t run the numbers on principal maturities, but I’m pretty sure that they too could be covered out of cash receipts—and when that happened, of course, the total debt outstanding would go down, and we wouldn’t be bumping up against the ceiling any more. 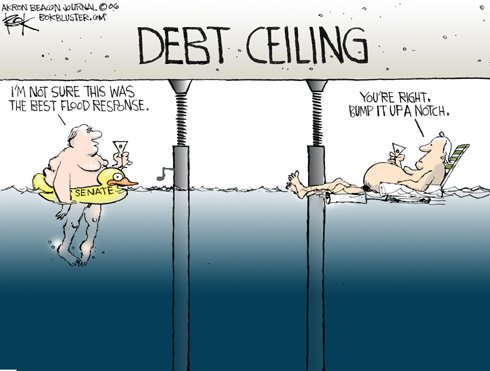 The point here is that the government has enormous expenditures every month, and debt service constitutes an important yet small part of them. If the debt ceiling weren’t raised, it stands to reason that just about any other form of government spending would get cut before Tim Geithner dreamed of defaulting on risk-free bonds.

Some of those spending cuts could be implemented almost invisibly. For instance, Social Security runs a surplus for the time being; it invests that money in special non-marketable Treasury securities, which count as Treasury debt. If the Social Security trust fund accepted instead just some kind of promise of a top-up at a later date, that could save billions of dollars right there...

...But maybe the smartest thing for Geithner to do would simply be to stop paying the salaries of members of Congress and their staffs...

In other words, at least in the opinion of Ip and other experts, the U.S. has virtually no chance of defaulting on its obligations.

Which makes the incessant shrieks of the Democrats and legacy media ring all the more hollow.

And, as it turns out, only about 71% of the American people oppose raising the Pelosi debt ceiling.

That scenario assumes the actors in the employ of the White House are rational. To support that, in the recent past, the debt ceiling has actually been technically busted while Congress hashed out the details of the raising through some other fancy accounting.

Regarding the cash flow, it's not the flow itself that can be tapped. After all, if I have $1 trillion coming in but $1.1 trillion going out, I have to figure out how to come up with that $0.1 trillion overspending. That's done by either borrowing or using liquid assets (mostly operating cash). On December 31, 2010, that operating cash balance was just under $343 billion. Using that, given current burn-through rates, SHOULD get us to July.

However, that idea does lead to a second one - the reclassification of intragovernment debt to debt not subject to the limit. That would free up, as of yesterday, about $4.6 trillion in additional room and buy everybody a couple of years to get their act together.

I did forget to mention that the current rhetoric coming from those in the Executive Branch belie the notion they are rational.