Map o' the Day: Matching U.S. States to Countries Based on GDP

A bit of a tangent. For those of you that are depressed because you feel China is going to take the US over by pure economic force, have a look at the map from The Economist below. 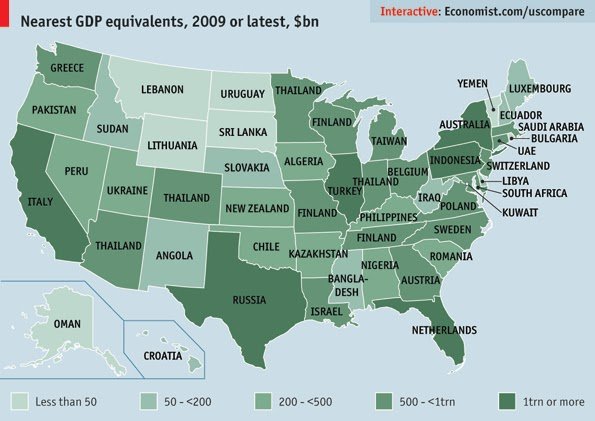 The American economy is still the most robust and energetic economy in the world. If we support and create entrepreneurs, we will stay there. China eventually may have a bigger economy simply by virtue of more population. The critical thing is that America needs to be the place where innovation happens. Generation Y can do that with the correct support.

If we don’t, in no time we will look like the quasi-socialist societies of Western Europe. Stagnant, with only memories of what it once was, and visions of what it could be.

at 6:48 PM
Email ThisBlogThis!Share to TwitterShare to FacebookShare to Pinterest
Labels: Economy, World

Interesting; but remember that "population" was also the main driver of US growth and expansion in the early 20th century, too. I'm not convinced that "innovation" is something only Americans can possess, or that the successful kind of innovation will only happen in a country with the same sorts of freedoms as those understood to be in the U.S.

A couple of comments...

Innovation isn't "American". The rest of the world has very innovative people. Our advantage has been our ability to ALLOW innovation to happen with minimal government interference.

As the left has grown, so has their natural tendency to suppress success - so innovation has been dropping here.

Second, on a lighter note, that map is scary because Janet Incompetano might get some ideas.

Nice one. A preview of the reservations for illegal immigrants into which America will be divided by the NWO! Ha Ha Ha!